By combining a wide range of perspectives from young women of diverse ethnic and cultural backgrounds, the Philadelphia podcast Girl Truth: What Lens Are You Looking Through? is inspiring people one episode at a time. “Girl Truth” is a product of Evoluer House, an award-winning nonprofit committed to assisting teenage girls in surpassing racial, economic and other societal barriers.

With a rotating cast of Black, Latinx, Muslim and Caribbean female co-hosts between the ages of 14 and 19, “Girl Truth” allows for different, nuanced perspectives from groups often underrepresented in media. Inspired by a citywide community event called “On The Table Philly,” several young women came together to create the podcast. Over nine months, beginning in August 2018, “Girl Truth” came to fruition, and it has already reached listeners in parts of North America, Europe, Asia and Africa. It has also made it into the top five of Apple’s nonprofit podcast chart in Ghana.

Author, songwriter and theatrical producer Nancy Gilliam produced each episode, for her it was a learning experience. “I knew nothing about podcasting and after the On the Table Philly discussion I had been an advisor,” Gilliam said. “But the person set to work on the podcast couldn’t do it and I didn’t want the idea to fall flat because we as adults didn’t help. I started studying, doing research and got this thing off of the ground. As far as the content, I really wanted this to be their voice. The biggest challenge was to be hands off as far as the content was concerned. I was in a position to lead and guide but I knew the universe was in alignment with it.” 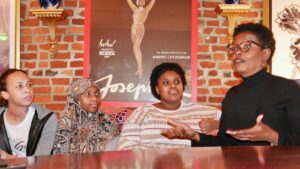 For co-host Laila Green, the authenticity of “Girl Truth’s” hosts plays an integral role in the way listeners connect to the podcast. “I wrote a research paper recently about how Black women are often portrayed in one type of image as aggressive people,” Green said. “In this podcast we see that we can be anybody and it doesn’t devalue our identity or Blackness. Sometimes people say if you’re talking a certain way, you’re ‘talking white.’ It’s important that people see we be who we want to be, and that it doesn’t lessen our culture.”

Green sees the podcast as an opportunity to discuss difficult subjects like white privilege and difficulties of the Black experience. “I enjoy discussing things I haven’t really talked about with people, like going with my Mom to a restaurant where we were the only two Black people and feeling like the spotlight was on me in a negative way,” Green said.

Fellow co-host Baiyinah Gough is enthusiastic about how well “Girl Truth” works as a podcast as opposed to a blog or YouTube series. “I like the idea of a podcast because you can listen to it whenever and don’t have to be looking at your phone like with YouTube,” Gough said. “Blogs don’t get as much exposure. Podcasts are up-and-coming but not every podcast makes it to the top.”

Gough believes the podcast can inspire other young women dealing with similar circumstances. “Someone out there may be going through the same thing as you and can relate to what you’re talking about,” Gough said. “Sharing our stories can also help someone else out and see that they aren’t the only person going through something or aren’t the only person that thought of something.”

Puerto Rican co-host Jennielee Hilario Rivera’s first language was Spanish and she has used “Girl Truth” to share her harrowing experience with Hurricane Maria in a special bilingual episode. “My episode was really hard because I relived a moment I walked away from,” Rivera said. “It was hard to talk about and remember all of the memories I had supposedly deleted from my mind. I cried a little bit and it was so unique. I love it when I listen to it. Now, I see it as an inspiration for other people and it’s not sad anymore.”

Evoluer House executive director Cheryl Ann Wadlington has dedicated herself to helping others and was recognized by the Obama White House as a Champion of Change. By working closely with the young women and team behind “Girl Truth” she learned to develop more trust. “I have a perfectionist nature so I was really surprised that I learned how to release and trust,” Wadlington said. “The biggest thing I learned was that I have we have awesome people on our team at Evoluer House.”

Ultimately, Green, Gough and Rivera and the other women that co-host “Girl Truth” hope to enact change and inspire other young women that hear their podcast to succeed. “Be yourself no matter what,” Rivera said. “It doesn’t matter if you come from another country or don’t speak the language. You have your own voice, own opinion and own feelings.”

Gough also believes that believing in yourself can take an idea far. “Nothing is really impossible unless you make it impossible,” Gough said. “You can do anything you set your mind to. If you want to do a podcast with your friends, you can do it.”

With some help, young women are speaking their truth to power thanks to “Girl Truth” and the whole world is starting to listen.

Written By
Michael Butler
Published On
December 9, 2019
Share Through