Crystal Barham-Guess remembers the exact date, it was August 24, 2017. After her name was called out loud, she confidently strode across the stage to collect her high school diploma. “I remember that date because it was a big accomplishment,” she says. “That’s the day I stopped our family cycle.”

At 21, Crystal was older than your average high school graduate, but this was no ordinary high school graduation. This was the commencement ceremony for YouthBuild Philadelphia, a charter school that gives young adults aged 18-20 (like Crystal, they can turn 21 while enrolled) a second chance to earn a diploma.

For Crystal, whose older siblings had dropped out of school, graduation was a big deal—not just because she’d be the first in her family to complete her studies, but also because it meant she could show her younger siblings (Crystal is one of eight children) that they can take control of their own destinies.

Many of the students in the YouthBuild program were pushed out of Philadelphia public schools, or, as in Crystal’s case, they dropped out. But, she clarifies, in most cases “we don’t just drop out because we don’t want to go [to school] anymore.” Crystal explained that she dropped out after her mom lost her job. “We needed the bills paid. I was next in line.”

Another YouthBuild alum, Shujja Hayes, was pulled from his high school by his father during his sophomore year. “It wasn’t my choice to come out. My dad wanted me to work with him. Me being young—I was 16—that’s what I did. I dropped out in 10th [grade].”

Between the school year beginning in 2012 and the one that ended in 2017 (the last year for which data is currently available), an average of 13,000 Pennsylvania teens have dropped out of school each year—about 1.5% of the total number of students enrolled at the start of the academic year. In Philadelphia, the proportion of students who do not complete high school is starkly higher: a 2014 Action News investigation estimated that as many as one in ten Philadelphia high schoolers would drop out before graduation. High school dropouts are less likely to get a job, and when they do find work, they’re unlikely to be paid as much as colleagues with a diploma. Dropping out may even make your life shorter: both men and women who don’t complete high school are expected to die a few years sooner than the national mortality rate.

The largest of 260 YouthBuild programs nationally, YouthBuild Philadelphia seeks to level this playing field. Students who did not have an opportunity to complete their studies in a traditional high school enroll in YouthBuild’s two-year program to earn both a diploma and vocational certification.

The first year (Year 1) includes an accelerated course of study that alternates between academic and vocational training every five to six weeks, with high school graduation to follow in 12 to 15 months. The second year (Year 2) involves career counseling and support from YouthBuild mentors, who help grads find and maintain employment or pursue post-secondary degrees.

Each August, approximately 220 students begin their YouthBuild Philadelphia journeys—and though that number seems shockingly small for a high school class, executive director Scott Emerick says that in fact, “Even 220 feels large. YouthBuild has been designed to have a 14-1 student ratio in classrooms, and even smaller on job sites.” 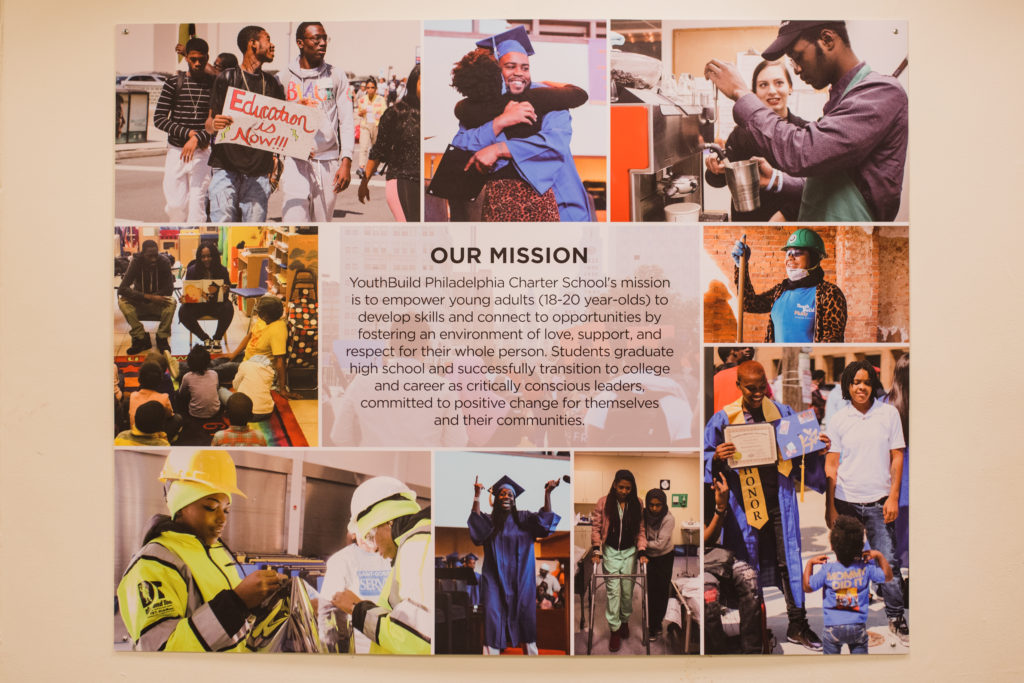 A key distinction of YouthBuild, unlike more traditional high schools, is that the students choose to be there. Both Crystal and Shujja decided they wanted more than the lives they were living after they left high school. For Shujja, who turned 19 the day he started at YouthBuild Philadelphia, it was about thinking bigger: “I got tired of doing what [my dad] was doing.” After a conversation with his older sister, who is also a YouthBuild alum, “I took my own initiative and did what I needed to do. I had a different calling. I had a different lifestyle ahead of me and I pursued it.”

Crystal realized that her mother had come to depend on her as the primary earner in their family and, “I was like mom, you gotta get back on your feet. I figured if I left she’d get back on her feet.” Neither found their parents to be supportive of their decision to return to school; both moved out of their parents’ homes.

Fortunately, students like Shujja and Crystal can find the support they need from the students and staff at YouthBuild. “It’s such a healthy atmosphere,” Shujja says. “I loved it. I expected a bunch of [students] who dropped out. I expected fights and other nonsense. But when I got there it wasn’t the case. People were there to better themselves. I could see their commitment. It motivated me.”

Unlike at a traditional school where, as Crystal put it, “People would make fun of stuff you can’t do,” she found herself amongst compassionate and caring peers and staff at YouthBuild. Early on she was so overwhelmed by her assigned YouthBuild mentor’s regular check-ins that Crystal even blocked her phone number. “Next thing I know, my sister come downstairs and says there’s a lady at the door.” It was the mentor, Jaqueline Smith. “That was a big sign there. She not letting me fail. When it feels like it’s time to give up, [the support team] won’t let you.”

For Shujja, the above-and-beyond attention he received from YouthBuild Philadelphia staff came as he was preparing to sit for his test to be admitted into the carpenter’s union. “When I was about to take the union test, I was real nervous. I had no type of confidence in me.” Concerned about his math skills, Shujja asked his math teacher, Peter Celona (“Mr. Pete,” to Shujja), for extra help. “I said, I really need your help, I need you to want me to succeed. And he said, ‘Listen, you can stay after school. It will just be me, you, and math.’ With his help, he really just—he changed everything.”

Asked to reflect on his time with Shujja—time he says didn’t feel like “extra time” because of his genuine love for teaching math—Mr. Pete recounted in an email, “What is remarkable about Shujja is his willingness to engage in productive struggle and the level of organization he undertakes to accomplish his goals. Oftentimes young minds are capable of more in one area than the other. They are driven and motivated but lack a thorough plan that accounts for obstacles or they have a realistic plan but are not driven or motivated enough to see it through.” Knowing that Shujja was determined to do what it took to get his union card, Mr. Pete says, was inspiring.

Today, Shujja is moving into his second year of a four-year apprenticeship at the Carpenter’s Union—he passed the test. “My goal is to have my own construction company. To flip houses for low-income families and have them live there. It’s going to be a lot more hard work. It’s going to take a lot of struggling, [but] I’m speaking that into existence. If I don’t, then nobody will.”

When Crystal agreed to be interviewed for this article, she was taking a few days away from TD Bank, where she currently works as a teller, to help out at YouthBuild’s annual Conference of Young Leaders (CoYL). She uses opportunities like this to develop another career she’s become passionate about: motivational speaking. “I want to encourage the kids now who went through all the stuff I went through not to give up. It’s hard to stick through. I understand these kids who want to give up. If you haven’t been this person, you don’t understand.” But Crystal, like Shujja, is proof that the YouthBuild model works when students dedicate themselves fully to it.

One surprise added benefit to Crystal and Shujja’s decision to attend YouthBuild was that their relationships with their parents improved. For Shujja, it was being able to show his father that he was able to take care of himself. “I think at the end of the day, he’s proud of me,” the carpentry apprentice said. “You come to a point where your child is still your child, but they become smarter and more responsible. I moved out when I was 18 years old and I’m taking on the responsibilities of being a man, not just being under him.”

As August 24, 2017 approached, Crystal wasn’t sure whether her mother would attend her YouthBuild graduation. Some of her siblings would be there, but she’d resigned herself to the possibility that her mother, still wounded from Crystal’s decision to leave home and go back to school, would sit the ceremony out. But as she walked across the stage to get her diploma, she noticed a familiar face up in the balcony. It was her mother, there to cheer her on. “When I seen her, I was all excited. I got this smile. I did it. I don’t have to follow the same path.” With YouthBuild Philadelphia, she was paving her own.

This article was written in partnership with The HIVE at Spring Point. The Hive is a collection of organizations, individual practitioners, and youth who focus on strengths-based youth development that empowers young people to make positive change in their lives and their world.

Categories
The Hive, The Report