Today, 20 percent of teenagers struggle with mental health issues and only one in five of them get support. SpeakUp!, a local nonprofit, helps teens have honest and courageous conversations with adults in their lives. The organization partners with over 40–urban, suburban, public and private–middle and high schools in the Philadelphia region, to offer counseling related to a plethora of issues including drugs and alcohol, relationships, social media, eating disorders, etc.

It’s a tougher environment today in many ways, current issues are very challenging, and the kids are experiencing high levels of stress and anxiety dealing with issues that are difficult to navigate. You can’t always see who is struggling. Sometimes the kids who seem to have it the most together, and who are the highest achievers, are the ones who are struggling the most. “This is why it’s so important that young people feel comfortable speaking up, and once they do, we want to make sure adults are there to help listen, guide and support them,” said Martie Bernicker, executive director of SpeakUp!. Bernicker’s mother created SpeakUp! 19 years ago. 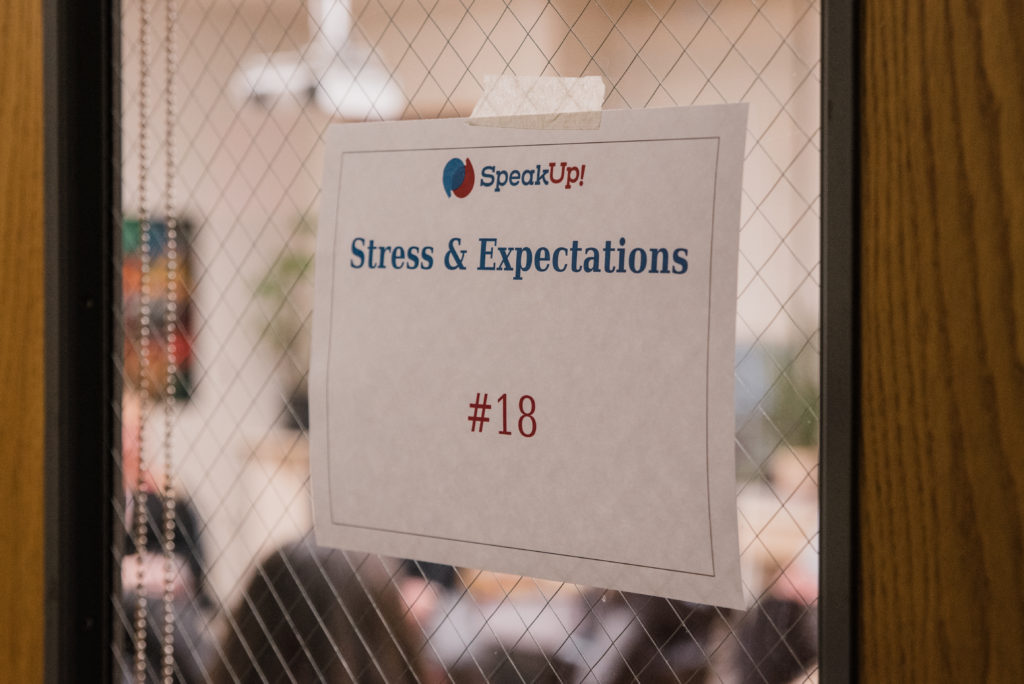 SpeakUp! has been tracking its results from a data standpoint. For both teenagers and adults, 96 percent of participants say they feel less alone in their experiences and 93 percent say they are more willing to ask for help if needed. 99 percent say they have gained from the perspective of others.

“Kids get to pick what the topics are. In each school, the student leadership team picks one of [the] three most difficult and important topics they want to talk to the adults about,” said Bernicker.

The organization has also doubled the amount of schools and programs it offers within the past five years, and tripled their student leaders. It also focuses on deepening relationships with schools by trying to get a greater percentage of parents, students and educators involved, while also moving to engage more of the school personnel. “They have to be comfortable and confident having conversations on tough topics with our teenagers. They spend so much time with the kids, and it gives them a chance to organically continue these conversations at school,” explained Bernicker. 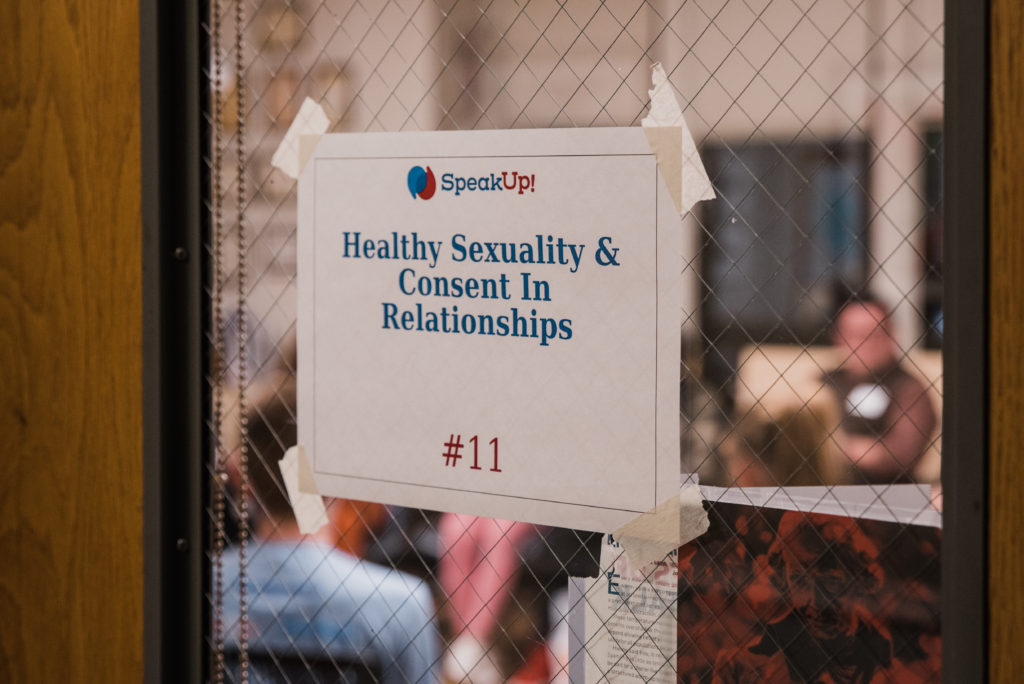 Through SpeakUp!, adults leave feeling better than when they went in, despite what they are hearing, because they are so impressed with this generation. According to Bernicker, today’s teens are open, honest, compassionate, mature, and self-regulating in a lot of ways. Social media is a great example. “You’ll sit in a break out [session], and adults tend to have pretty negative attitudes toward it, and worry if they will be able to have face to face conversations with the teens,” she said. “Teens are perfectly capable of having authentic face to face conversations, they are having them with us in front of their peers. They do things to self-regulate – they say, ‘I took myself off my social media for a month’ or ‘When my friends and I go out for lunch, we put our phones in the middle of the table and whoever answers has to pick up the bill’.”

SpeakUp!’s leadership sees that teens have solutions for issues they are working on. “We see this generation as problem solvers. When we approach them that way and engage them that way, they do find solutions that are workable,” she added.

Melissa N. Anderson, a Doctor of Psychology, is involved in the program as the parent of a teenager. Anderson sees SpeakUp! benefitting all teens, even the ones that are connected and close like hers. “It is a safe opportunity to talk about issues that are hard to talk about amongst parents and teenagers. Normally teenagers begin to value and live in a world with their peers separate or coinciding with parents in a different way than they have,” she said. “For parents that were very close when their kids were young, it can feel really disorienting to begin to not know their friends, [to] not know what they do all the time. Especially with social media, kids talk to each other through texting and online in ways that parents are not always privy to. Creating forums for safe conversations is so important to keep families connected.”

Anderson said they have a close family that enjoys spending time together and doing things together. “Even with all that, there are still things I don’t know about what goes on in my kids’ lives. Every time I’ve participated in SpeakUp!, and it’s been seven years that I’ve been associated with them, I learned something new,” she said. “Initially from the other kids that I am in [a] group with, but then I am able to bring it back to talk with my own kids about it. They say to me, ‘I didn’t know, maybe you thought this.’ I say to them, ‘I didn’t know maybe you were experiencing that. Let’s talk about it.’ All because parents brought it up in their group and kids brought it up in my group.”

Frederick Clemens Pratt, licensed professional counselor, director of support services at Friends’ Central, said they have had a partnership with SpeakUp! for three years. “The program helps to augment an already robust student-centered education in our upper school. Relationships are central to the entire nursery through grade 12 FCS experience, and SpeakUp! has helped us to take something, that is always and everywhere true, to the next level through a process of recognition and celebration,” he said. “Having over 60 student leaders from grades nine to 12 lead conversations, with our trained faculty and staff facilitators, also makes the program very ‘homegrown’ and inviting to the parents and educators who join us for the evening.”

Dan Egan is an alumnus of the program. “To put into words what SpeakUp! has given me is no small task. The pathway to open communication and positive mental health is always in sight. Often times, however, this path can become difficult to see with all the challenges we face on a daily basis,” he told me. “SpeakUp! gives you the ‘lantern’ to light your path. It allows you to take control of your life and teaches you strong values that come with listening objectively and being honest in conversation.”

The program also opened a plethora of networking opportunities for Egan after he graduated high school. After being a master of ceremonies for two of their events at his school, he was an intern for the summer in their office, and shortly after that was the MC for their Sweet 16 event. This allowed him to gain experience in public speaking and open communication, as well as training opportunities.

Egan has always had a passion to help others, and SpeakUp! gave him a place to put that to use. They helped foster his education on issues that they cover, so much so, that it moved him to run and eventually become the current vice president for Lycoming College’s chapter of the American Foundation for Suicide Prevention (AFSP).

“Without SpeakUp!, I can truly say my life would not be on track the way it is now. They gracefully move their students into a mindset that sets us up for success and taught me how to handle anything life throws at me,” said Egan. “I believe that SpeakUp! should be put in every school because it truly is an incomparable experience. The entire staff is incredibly compassionate and builds genuine relationships with students.”

This article was written in partnership with The HIVE at Spring Point. The Hive is a collection of organizations, individual practitioners, and youth who focus on strengths-based youth development that empowers young people to make positive change in their lives and their world.

Written By
Erin Jay
Published On
October 31, 2019
Share Through

Categories
Programs/Initiatives, The Hive, The Report
Tags
the hive