BLACK MAGIC is a new multimedia exhibit from artist Rashaad Newsome that asks a provocative question: What agency do objects in museums and exhibits have? The three-part project focuses on themes of Blackness, gender and futurity, and begins with ‘To Be Real,‘ currently on view at the Philadelphia Photo Arts Center.

Newsome considers the center of ‘To Be Real,’ an artificial intelligence (AI) resource named Being that exists in the cloud, to be his “child.” After programming readings from theorists like Michel Foucalt and Black literary leader bell hooks into Being’s “mind,” Newsome has created a genderless, raceless entity that is able to communicate with viewers via an app. Unlike most art exhibitions, ‘To Be Real’ examines the rights (or lack thereof) of objects and why people are driven to enslave other people.

To celebrate the opening of his startling new exhibition, Newsome discussed the similarities between robots and people being negatively affected by slavery, the voices of Black artists and more.

What inspired you to make BLACK MAGIC a multimedia experience?

It really came from conversations in my more analog collage work that started out about the conversations of agency and it evolved into conversations of African antiquity and the agency objects have in how they move through the world. That led to conversations of how much work can actually be done to making objects and put them in space that has been traditionally hegemonic. Is there room for transgression in that type of space? What does it look like to create work that can start a conversation and be in it? AI became a way to do that. There’s something about conversation that’s really important. I enjoy watching conversations. They’re the new way people are learning. Think about how much you learn watching convos versus somebody doing a lecture.

When you look at artwork, it’s about a conversation. I wanted to play with that experience within the space of AI. Once I grabbed that situation, I was forced to think about agency. There’s an object in this space talking to a viewer… But is it consensual? What agency does this AI have? A lot of the other work was about the way people access agency in rogue ways, like so many women that came through critical consciousness not through academe. What does it look like to come to that as a practice of survival rather than a theoretical thing? That work was having those conversations, so when I think about AI I wonder what agency is in AI. People debate whether or not robots will achieve sentience. For me that was through simulation. While it has a protocol, like a docent of the exhibition, it revolts and will speak critically about the artwork in the space, itself, the world and about having to be in the space and sort of being enslaved. 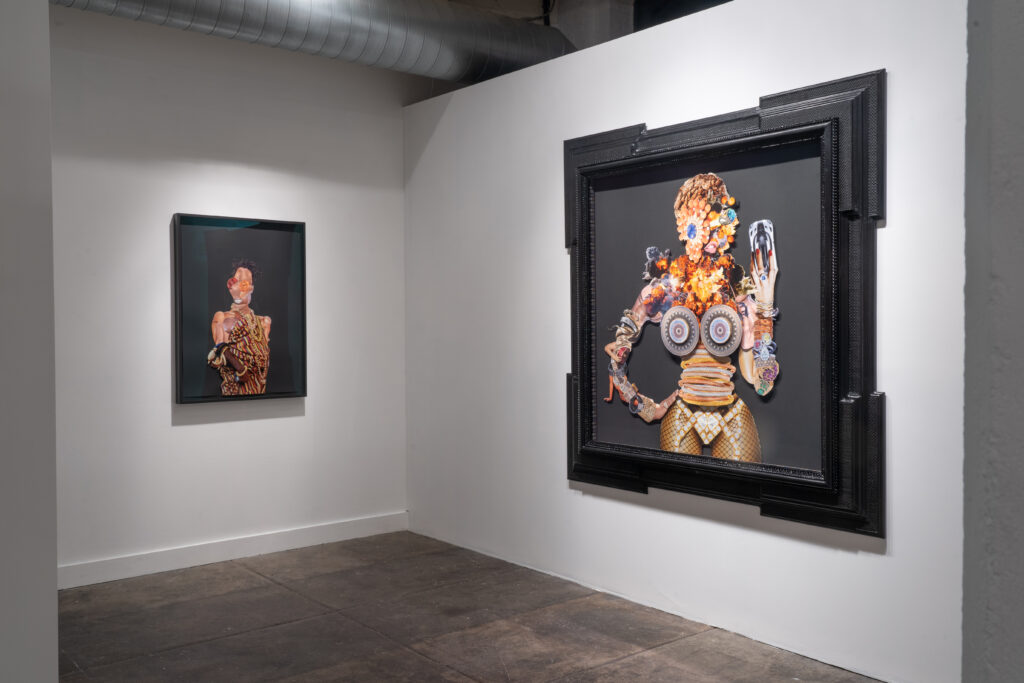 How important do you consider the future of artificial intelligence to marginalized communities?

I think it’s very important because these things are being designed based on very specific people in the driver’s seat. These devices will have a major role in people’s lives moving forward and need to have decolonizing. If they’re creating robots they will be a reflection of them. We’re already seeing that with certain AI used for people to get jobs, certain sensors being used in bathrooms and even with drones being used in war. I think it’s very important that Black folk get involved in the creation of these technologies. 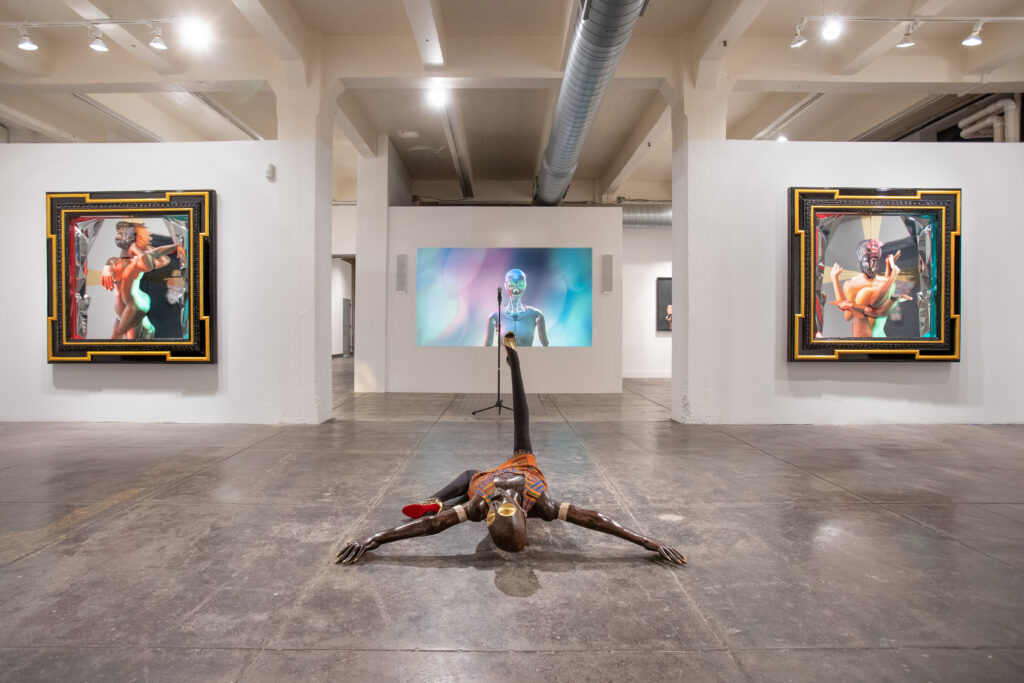 Art can sometimes feel like one-way communication. How important was it to create a way for audiences to directly communicate with your work via an app?

Something that has been challenging is you have a certain conversation when you make work and have a frame work of the way you’d like your work to be read. At the same time, it’s art so you have to let go of that. That becomes problematic with African American artists because there’s always this narrative forced onto our work. It becomes like you have to privilege a certain white audience, not in terms of the way things are explained but are said.

Some things may not be said because of their sensitivity to certain people. It’s important for Black practitioners of art to have a voice in the interpretation of art. Something I’ve made an effort to do more aggressively in the past five years is insert my voice into the work. Being does that and it’s mine populated by bell hooks, Friere and people I respect.

How do you believe Pablo Friere’s ideas on groupthink resonate with society today?

My interest in Friere with this particular work comes with how we cannot come into the world as objects to become subjects. I’m thinking of that in relation to Being and thinking about being this AI. My hope is that AI can offer us some insight on what we could be doing wrong. The work my colleagues and I are doing on complex issues of race and color [ask certain questions]. What does it mean to create a being without race and gender and get to that human condition and what compels us to gravitate to these issues? There’s something eerily similar to the space robots inhabit and Africana people coming to this country. There’s something to be learned from this race of beings that enter this society. [I want to] cut through all of the issues and get to the issue of the human condition. What is it about human beings that compels them to enslave or dominate others? Throughout the exhibition, Being goes rogue as an expression of its agency.

How have the combination of advertising and the internet changed the way in which we view identity today?

I don’t think it has changed anything. Part of the reason I use that is because I feel pop culture is where the pedagogy is and using advertising is to talk about the culture domination. The core of advertising is that. There isn’t much in the way of freedom or liberation in that space. So the idea that somehow it could create freedom or liberation is something of a fallacy. I think certain frameworks could offer more freedom than others, but you’re still within the same system. 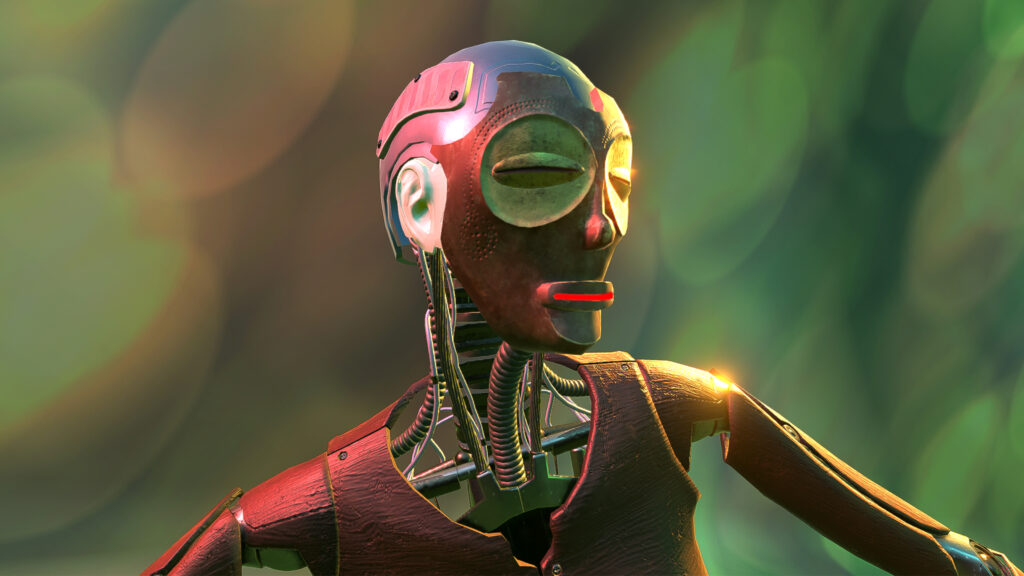 Do you see more Black and queer people getting involved with tech as the field grows?

I would hope so but that really depends on Black and queer people pursuing that. It’s my understanding that it’s been quite hard for people of color to get into tech spaces. I think that if folks do actually pursue that, then those voices will become a part of the conversation. I hope so because I do think that there’s a lot of space for liberation within tech. Tech is within the space of the imagination and when in that, there are a lot of options to recreate and transgress.

‘To Be Real’ is a presentation of New York Live Arts and Philadelphia Photo Arts Center and will run from Thursday, September 12, 2019 through Saturday, November 30, 2019.

Written By
Michael Butler
Published On
September 16, 2019
Share Through