Many therapists learn to use a “blank slate” approach: “we don’t offer any of our own personal understanding, beliefs [or] values into the therapy space,” explains Rashatwar, a South Jersey native, known as @thefatsextherapist on Instagram. But at the practitioner’s new Philly space, the opposite is true: “We bring capitalism, we bring anti-blackness, we bring fatphobia into the therapeutic room,” letting clients’ feelings actively respond to these structures.

Rashatwar’s Instagram currently boasts more than 83,000 followers, dealing truths like “you can’t call it feminist art if there aren’t any fat people in your body of work,” and “being fat doesn’t erase your white privilege.” The therapist’s feed urges followers to just get rid of clothes that don’t fit, buy food you’ll actually eat, take space for yourself and allow yourself pleasure—and remember that idealizing thinness is a symptom of white supremacist body standards that also demean people of color, people with disabilities, and LGTBQ folks.

when we internalize fatphobia, we internalize a structure that seeks to punish, invisibilize, and exterminate the fat body. when you deny your fat body the larger clothes size it needs, the food it really wants to eat, the fat friends it really wants to have, you’ve internalized a narrative that your current fat body deserves punishment until it conforms to the acceptable societal standard ❤️ but i’m asking you to identify whose fatphobic voice you’ve internalized. for me, it’s my father. and every time i’m able to distinguish his fatphobic voice sternly disapproving and judging me internally, i get to remember that i’m not his voice. i don’t want to share his beliefs about fat people any more than i want to share his other anti black or homophobic or patriarchal beliefs. i untangle his beliefs from my own. and that’s a decision i get to make for my own self preservation ❤️ challenge how easily you collude with your internal fatphobic bully. give your fat body the pleasure it deserves. choosing punishment or self denial can be a sign of non acceptance, or hatred of this fat body. don’t listen to mainstream desirability politics that puts conditions on which bodies are allowed good things, and which bodies deserve punishment just for existing. desirability politics will have you believing migrant children are disposable enough to belong in detention centers. don’t get caught in that carceral trap ❤️ if you’re interested in working with an anti diet dietitian who can help you learn intuitive eating, check out the intuitive eating directory (google) of counselors and professionals. you can also purchase the intuitive eating book & workbook. or check out @chr1styharrison podcast to learn more about the anti diet movement

It’s the age of millennials and their therapists—and naturally, that enters our online spaces, with some therapists garnering huge social media followings. Especially for folks who can’t afford therapy themselves, this can be a valuable resource.

But as Rashatwar knows personally, therapy is hard work. Despite the useful tidbits we can carry from online platforms, there aren’t any shortcuts. A good therapist works with you over time on the narratives in your life, and for many people, demonstrates a first experience of what Rashatwar calls “unconditional positive regard.” In other words, a relationship with someone who’s not making you earn trust, love, and respect by your qualities or actions. Valuable as many social media platforms are, they can never replace that one-on-one therapeutic relationship.

Rashatwar didn’t start out wanting to be sex therapist, but from a young age, they say, peers did seek them out for advice on teen taboos like sex, boys, drugs, and alcohol. Rashatwar was living with family in New Jersey after finishing their undergrad when they got the opportunity to train for a local domestic violence support team.

The ensuing work helped Rashatwar understand and exit an abusive relationship while also helping others.

“I would get these calls in the middle of the night, and would have to report to a police station or a hospital,” offering resources to people in crisis. The future therapist learned firsthand how complicated these partnerships are—including family, financial, and immigration factors.

“I didn’t think of it like a chore,” they say now about the work. “I noticed that I offered a stillness in this crisis moment.” What was supposed to be a 20-minute conversation would go on for an hour or two.

trigger warning: mention of weight & dress sizes . when i use the word fat i am centering the fattest bodies in my definition. that means the folks who get exploited by reality television (ie. my 600 lb life) to make fatphobic shows in order to promote a healthist and anti fat agenda. fatphobia is a project of white supremacy. we cannot undo white supremacy without undoing fatphobia . so if you’re white and using fatness as a lens to understand your mistreatment, remember that the fatphobia you experience as a small fat (size 12-18), mid fat (size 20-24), or even super fat (size 26-30) is relative to infinifats (size 30+), those at the highest end of the spectrum. this is a fat spectrum designed by Ash over at @fatlippodcast . be conscious of the ways you may be taking up space in fat positive spaces if you are not the most marginalized. sometimes that’s covert white supremacy still needing to be unlearned . most of all, remember that your fat does not cancel out your whiteness. small white fats should always be aware of their colonization of fat posi spaces IRL and on the internet. if you’re not centering the most marginalized, then who is this movement for? . if you are a small white fat, what are some ways you amplify more marginalized voices? how do you remind yourself to be aware when you’re colonizing a space? offer some tips and tricks to n00bs below 🙏🏽❤️

They had been doing this for two years when they learned about a dual degree masters program in social work and sex therapy at Widener University. Rashatwar began the program in 2013, alongside the rise of Black Lives Matter, and then the Ferguson riots: “the formative years of understanding how anti-blackness and police brutality intersect.”

For Rashatwar, the program was “a place where I was able to intersect sexuality with politics,” and “politicize our understanding of desirability,” i.e., how the culturally approved appeal of your body affects income and job prospects, family spaces, and what kind of neighborhoods we live in, and how it’s informed by anti-blackness, fatphobia, and ageism. 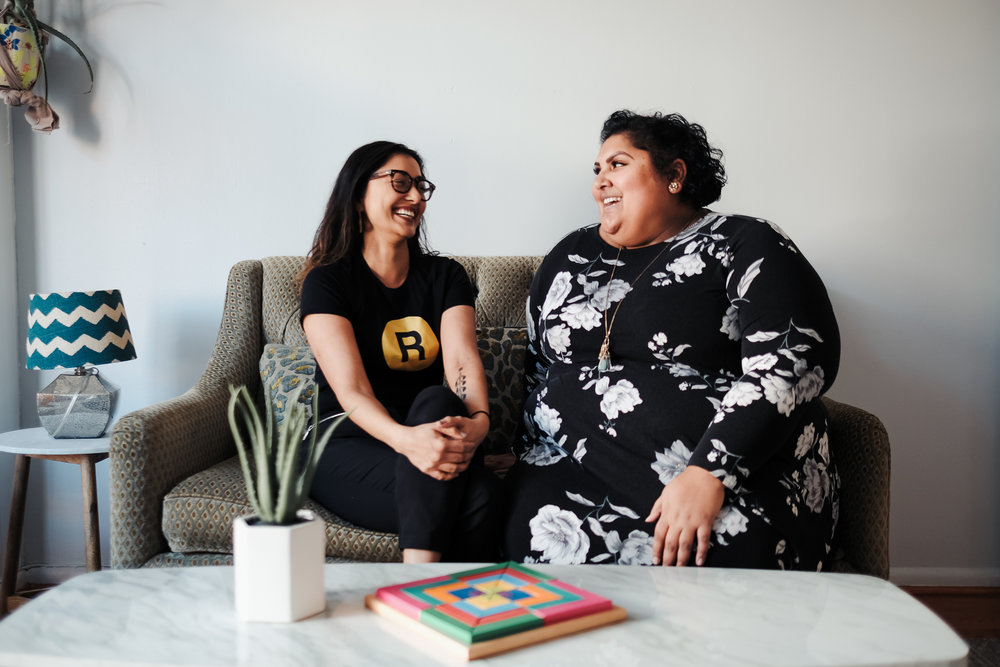 Rashatwar first met her Radical Therapy Center cofounder, Khalida Sethi (another child of immigrant parents) at Widener. They noticed Sethi as one of only a few people of color in the academic landscape: “there were no other Asians in any of my grad programs.”

Rashatwar says a real connection with Sethi couldn’t happen until after graduation in 2015. Grad school was inspiring and invigorating, but it was also disillusioning. Rashatwar thought social work would be an inherently “radical” field, but they say the institution showed little interest in tackling white supremacy.

“You think you’re not racist when actually all of us are racist. We’re still working through our anti-blackness,” they say. The Radical Therapy Center was Sethi’s idea, Rashatwar says. She “wanted to start a practice together where we would not have to work with people who are not politicized like us.”

Earlier this year, Rashatwar quit their nonprofit job to go full-time at the Radical Therapy Center, where they began seeing clients in June. It’s a unique setting for therapy, because “at therapy school we learn how to externalize negative self-talk,” for example, casting it in a voice of a parent or a poisonous political figure. But at the new practice, the partners can make fatphobia, racism, or capitalism the face of that talk. They’re also excited to support folks looking specifically for therapists who can contextualize the immigrant experience. “And we get great feedback from our clients. That’s something they’re uniquely looking for.”

Rashatwar is dedicated to combating the many forms of fatphobia (all the ways society discriminates against fat people and policies their bodies in dehumanizing ways)—especially internalized fatphobia, in which fat folks suffer these systemic effects in their own self-concept. And it’s time to tackle this: the evidence is mounting that people’s weight, on its own, actually has little to do with their health, despite decades of severe medical and social pressure to pursue thinness. (If you’re exploring body-positive spaces, try Sonya Renee Taylor’s The Body is Not an Apology or Virgie Tovar’s You Have the Right to Remain Fat).

As Rashatwar puts it, “internalized fatphobia can feel like an inability to get mad at someone who deserves to feel your anger,” a concept that also applies to things like internalized misogyny (which women and nonbinary folks alike can experience). And this difficulty in expressing anger “is especially a gendered experience … a lot of that is the socialization of being a woman,” afraid to take up both physical and emotional space.

It can be easy to spot physical fatphobia (brands that exclude large people from their sizes; public spaces that don’t accommodate large bodies; doctors who refuse medical testing or treatment to fat folks), but recognizing emotional fatphobia is important, too, Rashatwar says.

“Sometimes fat folks are great listeners,” they say, “and that’s because there’s a difficulty in sharing and taking up the nonphysical space.” Fat folks may hesitate to reciprocate casual banter, fearing they’re not worthy of notice. This “shrinking of ourselves in so many physical and nonphysical ways” extends everywhere, from being less likely to negotiate consent and pleasure during sex to shying away from ordering a complicated beverage at Starbucks.

As their public platform as a lecturer has grown, Rashatwar’s work isn’t without pushback. Open attacks from right-wing outlets are common, but if you Google Rashatwar, it’s easy to find a range of media voices dripping with disbelief and condescension about the activist’s gender and identity, their educational expertise, their message, and their body.

After a spring 2019 appearance at St. Olaf College in which Rashatwar asserted that children can’t consent to diets any more than they can consent to sexual abuse, and drew a clear line between white supremacy and “diet culture,” which keeps us perpetually hooked on the goal of losing weight, things got worse.

The backlash was so strong that Rashatwar had to hire a digital security team to wipe their personal data off the web, because of widespread threats of doxing (in which someone’s personal info or location is published online, exposing them to physical threats from detractors).

But the Fat Sex Therapist isn’t stopping any time soon.

“It’s almost like a new religion,” they say of finding the vocabulary for diet culture, fatphobia, and how they connect to other structural injustices. “I know it’s sticky to think about it like that,” they admit, but there’s a whole language and belief system around the binaries that govern this discrimination: masculine or feminine, good bodies or bad bodies, light skin or dark skin. One post and one client at a time, Rashatwar hopes to dismantle the harm.

Written By
Alaina Johns
Published On
August 26, 2019
Share Through