There’s a lot of noise coming from the kindergarten classrooms at John B. Kelly Elementary School in Germantown. That’s because “Mr. A” and “Mr. B” are visiting–and they’re making reading fun.

Temple alumni–and former football players–Akeiff Staples and Brent Johnstone are the founders and executive directors of FathersRead365, an early childhood literacy program. They dropped by the school one morning in March to perform one of the organization’s core functions: “active reading.”

What happened next was less of a lesson and more of a party. Staples and Johnstone–donning gray t-shirts stamped with their logo–arrived with a box full of books and kicked things off with a group rendition of the ABC’s, followed by a lively reading of books that prompt kids to shout, jump and run in place. “We want to build their excitement for reading,” Staples says. “So by the time they reach first grade, they’re avid readers.”

Before their partnership, Staples and Johnstone had each been running their own father-centric initiatives. It was only after a mutual friend suggested they join forces that they founded FathersRead365 in 2017, as one of five smaller programs under the umbrella of nonprofit FathersLead365. However, they quickly realized that their literacy branch was more of a full-time gig. 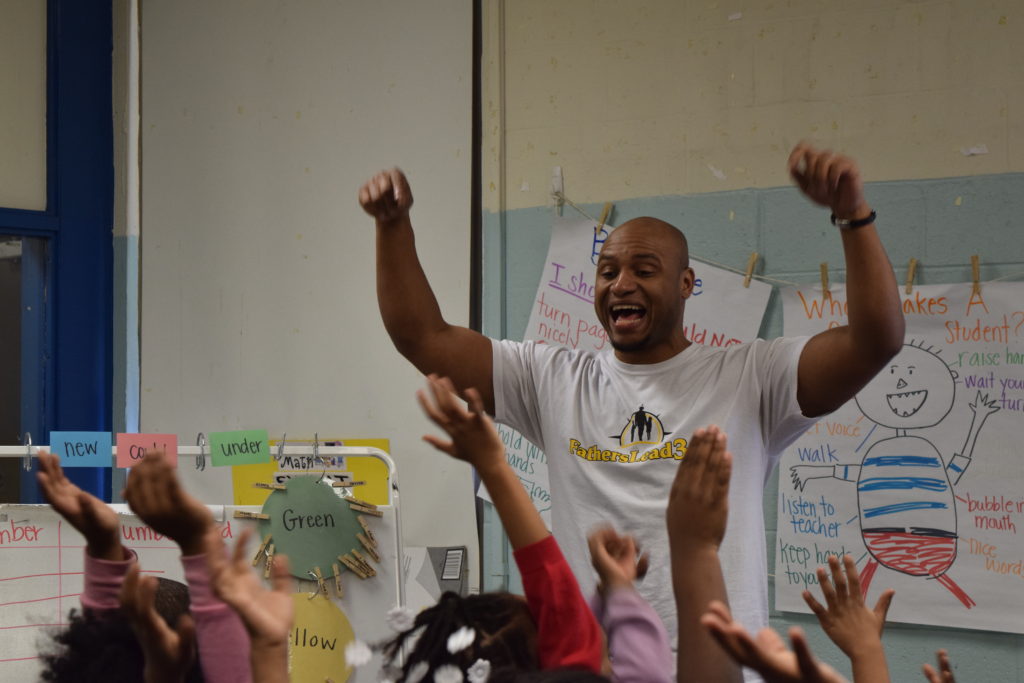 “We all saw the urgency of a program like this in our community and also the happiness that it brought me and Akeiff,” Johnstone says.

“Urgency” isn’t an exaggeration. Two-thirds of all Philadelphia third graders cannot read at grade level, which research shows increases their likelihood of dropping out of high school.

FathersRead365 is dedicated to its self-described “Four Pillars”: performing active readings and training parents to do the same at home; distributing free children’s books at events; encouraging family and community engagement; and producing original content.

In addition to educational YouTube videos (still in production), that content includes two published children’s books: I’m Beautiful and I’m Proud and Mr. Healthy Snacks, both of which are fixtures in their active reading sessions. The latter encourages healthy food choices–an issue near and dear to Staples.

“I’m a diabetic, so a lot of the decisions I made when I was a child impacted my life, my holistic self,” he says. “Some of these kids are coming to school and their breakfast is chips. Breakfast soda. We want them to know that they can choose.”

The nonprofit has been making major strides lately. The William Penn Foundation recently gifted FathersRead365 a grant for “capacity building,” while the 2019 Greater Philadelphia Social Innovations Awards recognized the program in its Parent Engagement category.

And thanks to a partnership with Eagles player Chris Long, and nonprofits United Way and Read by 4th, Staples and Johnstone will be distributing 7,500 books this spring–adding to the 15,000 they gave away in the past year.

Staples and Johnstone attribute their success to the one thing that makes them stand out from other literacy programs: fatherhood. According to Johnstone, studies show that a strong paternal presence all but guarantees success later in a child’s life.

“I would like to add that we are Black fathers,” he says. “In Philadelphia, where we’re doing most of our work right now, a lot of times the services that are for the Black community aren’t usually developed and created by people from the Black community.”

Though Staples is from Media and Johnstone is from Germantown, they both say that their love for community outreach was born just off of Temple’s campus in North Philadelphia.

Staples majored in geography and urban studies and developed a love for social issues thanks to a course that covered gentrification in the surrounding neighborhood. Johnstone, meanwhile, majored in social work and interned at nearby R.W. Brown Community Center and the Philadelphia Military Academy at Elverson.

“They’re literally the campus of Temple, but they’re worlds apart if you don’t dive into those communities,” Johnstone says. “I loved that fact that I was able to walk out from my dorm room, a block over, a couple blocks down, and be able to work in the community that wanted me and embraced me and needed me.”

There’s no doubt that the Philadelphia community needs programs like FathersRead365. And while the organization aims to give back, Staples and Johnstone are the first to admit that they get plenty in return.  “We’re better men, better fathers, better husbands because we do this program, because we are experiencing total joy,” Johnstone says. “If you’re living a life of joy, you can do some amazing things.”

If you’d like to help support FathersRead365 you can make a donation here.

Written By
Brianna Baker
Published On
June 24, 2019
Share Through