An idea that stemmed from a college thesis project has grown into a national and international success in product development. Oat Foundry is an engineering design and product development company; this group of engineers solve problems by building machines for brands and companies. Their slogan, “We Build Cool Stuff,” sums up their mission.

Founder and chief executive officer Mark Kuhn has never had an engineering job outside of Oat Foundry. During his sophomore year at Drexel University he made the decision to become an entrepreneur. “[My mission is to] grow. Grow in ways that we start to look at making things that make people’s lives better, making things that make the world better,” he explains.

John Halko IV, Mike Courtney and Mark Kuhn attended high school locally; during their tenure at Drexel University they met the remainder of the co-partners, Luc Tenthorey, Jim Vescio and Sean Rossiter. A senior design thesis project in 2013 brought them together forming what we know now as Oat Foundry. “It’s fun working with friends for the same reason that the business has grown well — it’s group project mentality,” said Kuhn.  “The reason this team is special, is because we did the group project and it worked out great because of the personalities involved, but then as partners we all work on the business. That’s the reason it has succeeded overtime because as we’ve had to course correct, we have mine plus five opinions to choose what’s best.”

In the early days of Oat Foundry, Kuhn and his five partners faced challenges starting a business right out of college and had to learn how to run it, deal with accounting and finance, control cash flow, and business development. Kuhn admits, “None [of us] have a business background. We are all mechanical engineers, and we’re good problem-solvers, so it started as we’re all going to be building things and then we started to segment into the roles [of the business] that were the best for us. As we started to differentiate and flesh those roles out, it became easier to be accountable for the growth of the company.”

This font made it onto some of the first Split Flap displays we ever built. We print 𝐁𝐫𝐚𝐧𝐝𝐞𝐝 and 𝕮𝖚𝖘𝖙𝖔𝖒 fonts but have since worked with a designer to develop an original Oat Foundry font. #splitflap #customprint #typographydesign #typography #webuildcoolstuff

Oat Foundry has five stages for the engineer and design process. It starts with identifying a problem and then moves to the invention stage where they look to create things to solve those problems. Scoping and Planning helps clients figure out exactly what they want and narrowing down the nuts and bolts of the engineering, like modeling, followed by Design and Procurement, Fabrication and Prototyping, Certifications and Testing and finally, Scaling Up to get to the size for manufacturing the final product.

Since their launch, Oat Foundry has experienced incremental growth, which has allowed them to sustain full-time employment with salaries for all six partners plus two additional employees; wages are within the expected range for an engineer’s salary. They have expanded their staff currently and are working with 10 part-time contractors.

In January 2019, the team moved to a new facility in Bridesburg, that is four times larger than their first location, allowing their business to operate at a larger capacity with the ability to house client machinery, electronics, and of course, split flap displays, which has caused recent buzz for Oat Foundry. 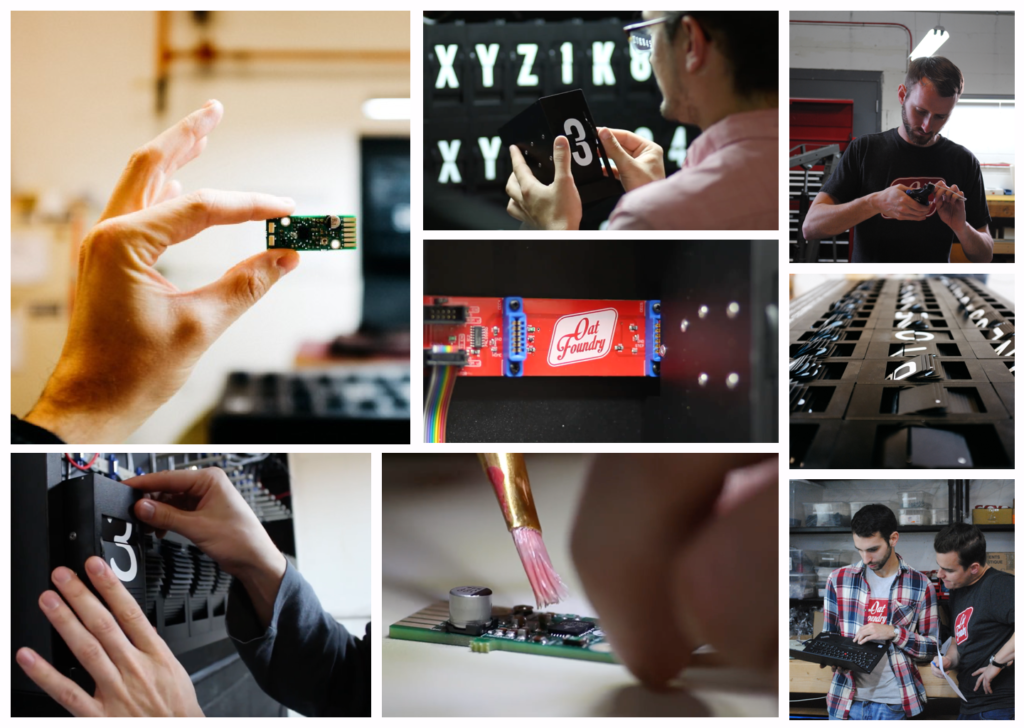 They are the only manufacturer in North America of the Split Flap Display, adding digital and custom size enhancements to make this numerical and alphabetical sign more functional and up-to-speed with today’s technology while maintaining its nostalgic features and sounds. Philadelphians have been saddened by the replacement of the popular and iconic split flap schedule board at Philadelphia’s main train station, 30th Street Station, with TV screens. Oat Foundry is standing behind a new split flap installation at the station, something they can provide everything on from the experience and engagement for the passengers to the functionality of its electromechanical complex system to relay train information.

“Philadelphians want it. What AMTRAK wants is a ADA compliant sign. What Philadelphians want is a split flap because that beautiful art deco station should have something better than a bank of TVs in it,” says Kuhn. Their goal is to put two split flap signs in 30th Street Station back to back, that accurately show train information in an ADA compliant way that’s also reliable, can be serviced easily, and cost effective. “Whether there is money built in for a split flap or not is yet to be determined. Fingers crossed.” They are still working on replacing the new split flap display.

Split Flap is a highlight product that Oat Foundry own the rights to and have a provisional patent on. Manufacturing split flaps had appealed to them and simultaneously began from a project with Philadelphia-based company, Honeygrow, for their restaurants and has now transitioned into a fully Oat Foundry owned product. They have the displays in places all over the world, including United Kingdom, Hong Kong, Central and South America, Canada and of course domestically in the United States.

Design and build happen in-house and involves software coding, architecture for that coding and designing circuit boards, to name some of the procedures. They are all handmade, created from conception to final product with standard dimensions or customizable features for larger scale displays such as color, size, or software integrations and can either be purchased or rented. Production time varies with customization — larger sizes may take seven months to a year to complete, while standard sizes can be turned around in about sixteen weeks; updates are applied constantly by the team.

“Although split flap is one of the things we’re becoming known for, it’s just one product. We’re an engineer and design firm. We focus on designing and building all kinds of machines and technology, products for brands and companies, and for ourselves. We have done projects that have started as company products and turned into Oat Foundry products, some that are completely service-based, and we drive some of our own internal development just based off of things we want to see in the world,” says Kuhn.

Written By
Daniela Galdi
Published On
February 25, 2019
Share Through