Army veteran John McAfee’s service dog, a young Belgian Malinois named Fury, usually stays calm when they go to the gym. But one day recently, as they were heading in, she got agitated. She kept getting in his way despite his commands. Ten seconds later, McAfee says, he felt a headache hit, and knew he needed to get to a safe place immediately.

“I’ve got a lot of neurological issues,” he says of injuries from his service in Afghanistan. These include painful full-body spasms that can leave him incapacitated for hours. He can’t say how Fury knows the episode is coming before he does, but somehow, she knows. That day she warned him on the way to the gym, he turned around immediately and got home, where he could lie down safely, with minutes to spare before the spasm hit. As always, she stayed beside him the whole time.

McAfee met Fury through a Virginia-based non-profit, Leashes of Valor (LoV), which provides certified, task-trained service dogs at no cost to military veterans living with PTSD (post-traumatic stress disorder), TBI (traumatic brain injury), or MST (military sexual trauma, or sexual assault occurring in the context of military service). LoV wants to expand with supporters in other states, and Philadelphia volunteers are helping to raise awareness and critical dollars, hoping their work will inspire action in other cities.

LoV was formally founded as a nonprofit in May 2017, by Danique Masingill (also the organization’s president), her husband Matt Masingill (who helms canine operations and training), and CEO Jason Haag, whose own service dog, a German shepherd named Axel, helped him realize he wanted to bring this opportunity for healing and independence to other veterans. All three founders are U.S. military veterans who bring professional experience in the service-dog sector to their unique nonprofit model, which is built on a holistic, peer-to-peer approach. This gives participating veterans (or “warriors” at LoV) authentic support through all the challenges of the program. 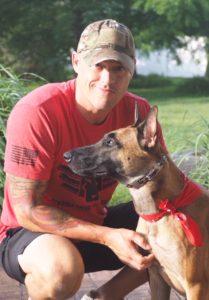 Interrupting nightmares and calming flashbacks or panic attacks are a few examples of what a service dog can do, says Haag (each LoV dog receives customized training). He partnered with Axel, who’s now eight years old, after his third deployment in Afghanistan — and at the end of a long line of other treatments.  “He’s just a doofus,” Haag says. But the dog has also revolutionized his life. “Since I got Axel, he’s helped me in countless things.”

The service dogs LoV trains can learn to sense unconscious physical cues, like tapping feet or wringing hands, that presage panic attacks. They alert their handlers, and help to ground and calm them, preventing the crisis. Haag says Axel helped him get off of the 32 different medications he had been taking previously to manage his symptoms.

LoV is in a worthwhile but challenging position, Danique Masingill explains. Mental-health professionals are recognizing what service dogs can do, and these practitioners refer an increasing number of patients to service dog programs. But Masingill says this trend in the healthcare industry is slow to translate to bureaucracy of the U.S. Department of Veterans Affairs, which currently does not fund service dogs as a treatment option for those with PTSD, TBI, or MST. “There’s not that much data available,” she says about service dogs. The VA can’t reach for a stack of peer-reviewed studies on them. For now, private donations power LoV. 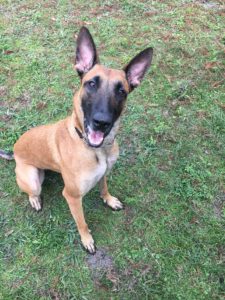 The training for a single LoV service dog can cost $20,000, says Megan Burns, who runs her own boutique marketing agency in Philly, and is helping spearhead a LoV fundraising effort in our city. She and Haag have known each other for years, and she began to volunteer for LoV back in 2016, before it was formally launched as a nonprofit. LoV supporters here are called “the Philly Pack,” and Burns says they’ve raised close to $60,000. She loves using her professional skills for a good cause. “This is the best compensation ever, when you see a service dog matched with a veteran,” she says. “I often get choked up about it … And it just takes one person [to help].” She hopes the Philly fundraisers can make a road-map for other supporters: “Imagine if we could spark interest in five or 10 other cities.”

Money raised goes to the dogs’ and handlers’ training, not toward buying dogs, Haag says: “Almost 95 percent of our dogs are rescued.” (Breeders are also able to donate dogs.)  A LoV dog must be 60-80 pounds, he explains. Any bigger, and they can’t fit on trains or planes; any smaller, and the dog isn’t tall enough to help handlers with mobility or balance issues. LoV isn’t breed specific, but it does favor breeds or mixes like German shepherds, golden retrievers, and labs (unfortunately, bully breeds, Dobermans, and Rottweilers face red tape regarding “dangerous breed” lists—which could hamper handlers everywhere from housing searches to the hospital). 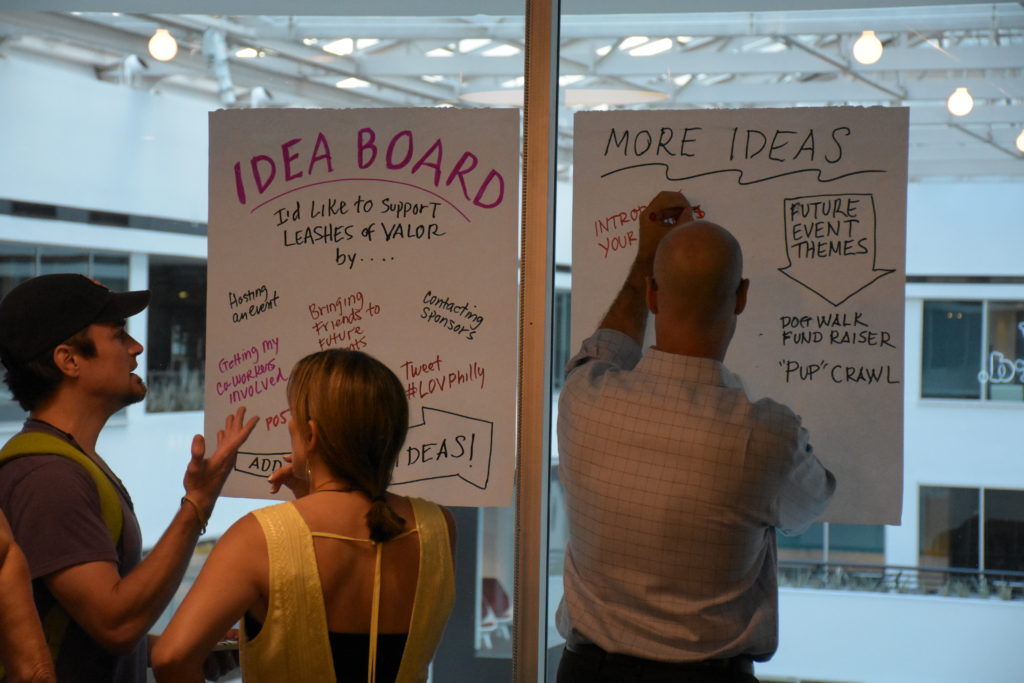 The nonprofit’s Milford, VA headquarters can host up to six dogs in training at once, and any dog that can’t meet the training standard is adopted out for life as a family pet. The rest eventually meet a veteran in need of a canine partner—and these dogs aren’t emotional support animals (valuable as those pets can be to people with a variety of challenges). They’re certified service animals who accompany their handlers everywhere.

After they’re accepted to the program, LoV warriors train to bring their dogs home with an intensive, no-cost 16-day in-house residency at the Milford property, Masingill says. She outlines the rigorous daily schedule administered by her husband, Matt. It’s a combination of seminars and hands-on training, academic work, practice handling the dog in public, and, if needed, a comprehensive crash course in having a dog (covering feeding, grooming, and health). Each warrior gets a small private cottage and eats breakfast and dinner in a communal space.

“At 9:30am, they load into vehicles and go into town,” Masingill explains. The trainees spend the mornings in places like grocery stores or the local Target, learning things like navigating shopping carts, electric doors, and various indoor surfaces alongside a large dog.  Then it’s time for lunch at a local café, where “you learn to sit with your back to the room.”

“That hyper-vigilance that comes with trauma or deployment, that comes back Stateside,” she adds. Veterans returning from dangerous and chaotic combat zones can have trouble re-acclimating to a civilian public. LoV trainees learn to relax their vigilance and trust their canine companion to watch for threats.

The rest of the day might see trips to more public places, like parks or libraries, and other activities. It’s exhausting for the trainees, but they also enjoy the camaraderie with fellow service members. McAfee was the first veteran to receive a LoV dog, and he says the program’s highly professional approach to training—both the dogs and the humans—sets it apart.  Now, with Fury alongside him, when something triggers his symptoms, “I’ll feel a cold nose on my hand or my wrist. She’s saying, ‘hey, chill out.’” He gives her ears a scratch and his tension eases. 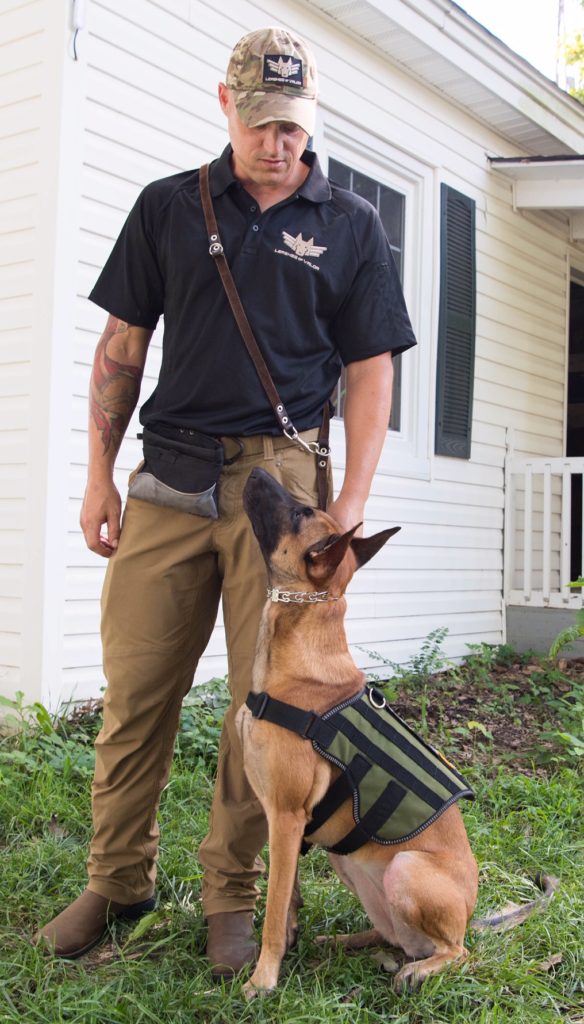 McAfee, a Florida resident, enlisted in the army at age 29, in 2007. His first tour of duty began in Iraq in 2008, where he spent time as an agricultural advisor. After more training Stateside, he deployed to a small unit in northern Afghanistan in 2010—an experience he describes as much more intense. He suffered major injuries, including a concussion after mortar rounds exploding a barrier threw him backwards into a wall.

He recovered, but while he led a patrol two weeks later, an RPG exploded right beside his vehicle, followed by a machine-gun ambush. He completed the mission, but when he got back to base, he says he got out of his vehicle and his body shut down. “I couldn’t talk for the next seven days. I was having big speech issues, and big cognitive difficulties.”

After a few weeks, he returned to normal duty, only to suffer another explosion that threw him 30 feet. Hot shrapnel hit his shoulder, his thyroid, and his carotid artery. A Medevac and emergency surgery in Bagram saved him, and after his recovery at Walter Reed and a short transitional stint, he was honorably discharged in 2011.

“For the first few years, I coped pretty well, because I threw myself into the veterans nonprofit space,” he remembers. He traveled a lot in a job with a veterans’ program of the PGA. But his old injuries reared up in 2013, when he suffered a series of seizures and other burgeoning symptoms. In 2016, he needed neck surgery related to his initial injury in Afghanistan.

He quit his job, took some time off, and then tried his hand as an entrepreneur. But “during that process, I really became withdrawn.” He resisted going out in public. His relationship with his family suffered. He met Haag around that time, at a veterans’ event, and Haag’s dog Axel. Later, Haag called him up. “He saw what was going on when he was here,” McAfee says. Haag asked him if he was interested in trying the LoV program.

“You have to make yourself uncomfortable to grow,” McAfee says now. “That’s true for anyone, but especially someone with trauma.” It was tough: trainer Matt Masingill threw him in at the deep end. “He tries to trigger you while you’re out with the dog,” McAfee says, “because the dog needs to see you at your worst … Matt would make me sit with my back to the restaurant.”

“I would drive to the gym and if there were too many people there, I would go home,” he says of life before Fury. “But now, it doesn’t matter, because I have my buddy.” Not only does Fury alert him to impending symptoms. She helps him keep calm when his trauma resurfaces, and achieve things like standing at a retail counter, with his back to the room, that were hard to do before.

Fury is exceptionally alert (a classic Malinois trait), and now, instead of constantly being on guard himself, McAfee trusts her to signal him in advance about anything startling. She keeps social situations manageable, too: when he gives her a “cover” command, she quietly places her body in front of him, which makes a natural barrier between him and other people who might unknowingly invade his space. All this has helped McAfee re-engage with his family and friends, get out of the house, and keep fit.

Haag and Masingill note that misunderstandings can occur when people see a service dog alongside someone who does not appear to be disabled. McAfee notices it sometimes. “I get looks. I can tell what’s cranking in their heads. I’m a pretty fit guy … If you look at me, you wouldn’t know. Like, why does that guy have a dog?” But he says the vast majority of his interactions are positive, and by naturally drawing attention to herself and away from her handler, Fury actually helps McAfee engage more with other people. In short, “she is my rock star.”

Stories like this mean a lot to LoV Philly fundraiser Megan Burns. “Why Philly?” she asks. “People care here. It’s not just about donating money. It’s about sharing and bringing awareness. You never know how you’re going to impact people.”

Written By
Alaina Johns
Published On
February 12, 2019
Share Through