Hum’n’Bards Theater Troupe, is an all-inclusive group of artists who create original musicals welcoming the queer and trans community to the stage while providing financial opportunities and raising awareness of social sensitivities to audiences.

When you attend a show, you can expect live musicians, dancing, scripted comedy, original and guitar-based music, lavish costumes and makeup, as well as lots of sparkle and glam. The Hum’n’Bards love a good aesthetic. Expect over the top creativity. They may not always use a linear story, but guarantee strong vocals, insightful lyrics, and professionalism.

Taylor Plunkett-Clements, managing director, or as she prefers HBIC — Head Bard in Charge, coordinates all the movings pieces of the troupe, together, with Wyatt Flynn, artistic director or Art Daddy, and the troupe’s Hum’n’Board or Board of Advisors, they produce live performance art with a variety of artists amongst the LGBTQIA+ (lesbian, gay, bisexual, transgender, transsexual, queer,  intersex, asexual) community, and push the norm by creating artistic content with powerful interpretations on societal standards or acceptances.

Plunkett-Clements and Flynn are both Temple University graduates who worked together during Plunkett-Clements’ first self-produced show, Temple Smash. After graduation, they continued their relationship performing sketch comedy and participating in improv comedy teams in Philadelphia. While working together at an eatery in Center City, the two would write ideas for songs and shows on napkins in between serving their customers, which eventually led to their first production and the start of Hum’n’Bards.  They grew to admire each other’s work and held the same views of inclusivity for queer and non-binary artists.

The troupe began over three years ago with the mission to bring accessible art to the queer community by offering a safe and welcoming environment for those artists to make art, relate to their art, be on stage and pursue their talents. To make shows more accessible, they lower venue costs and offer pay-as-you-go ticket entry. The audience is a major importance to them and doing so ensures the community to never feel as though they can’t afford to see Hum’n’Bards’ shows or live performance art in general. They also spread their work throughout venues in Philadelphia such as L’Etage, Tabu and The Fire.

Hum’n’Bards consists of multi-talented artists such as lyricists, scriptwriters, dancers, singers, actors, directors, producers, comedians, musicians, and editors. Plunkett-Clements, herself, is a multi-talented artist who sings, acts, writes and produces, including a handful of Fringe Festival shows, which she has been involved in since high school. She is a trained dancer who has been dancing for over 12 years, has completed a full curriculum of improvisation classes at Philadelphia Improv Theater, was a 2018 finalist in the Songbird Season 10 singing competition, and was nominated for a Philadelphia Drag Award.

All of the artists involved do a lot in the community and collaborate by offering a variety of skill and talent to the creative process for each Hum’n’Bard production. Collaborating together on each show is crucial to the directors and artists, and connects to their mission. “A common theme we see among the artists we work with is that are tired of working on or auditioning for roles where they get misgendered or have to play a binary-gendered character — who don’t feel like they have any control of their art and how people see them as an artist. We try to put all that power in the hands of the creators and artists we work with. I think it’s an important thing for queer artists,” explains Plunkett-Clements.

A lot of the work that they do is devised from the ground up and compiled in different ways. Sometimes they take a “normal” idea about the world and the cast and crew come in and add to that idea. “That’s how you make your art political. You cast the world that you see around you and get out of your bubble and see the world around you,” she says.  Next, they will meet for several rehearsals to develop the show concept, performance elements like songwriting, scriptwriting and creating original music compositions, as well as promotional preparation like photo shoots. 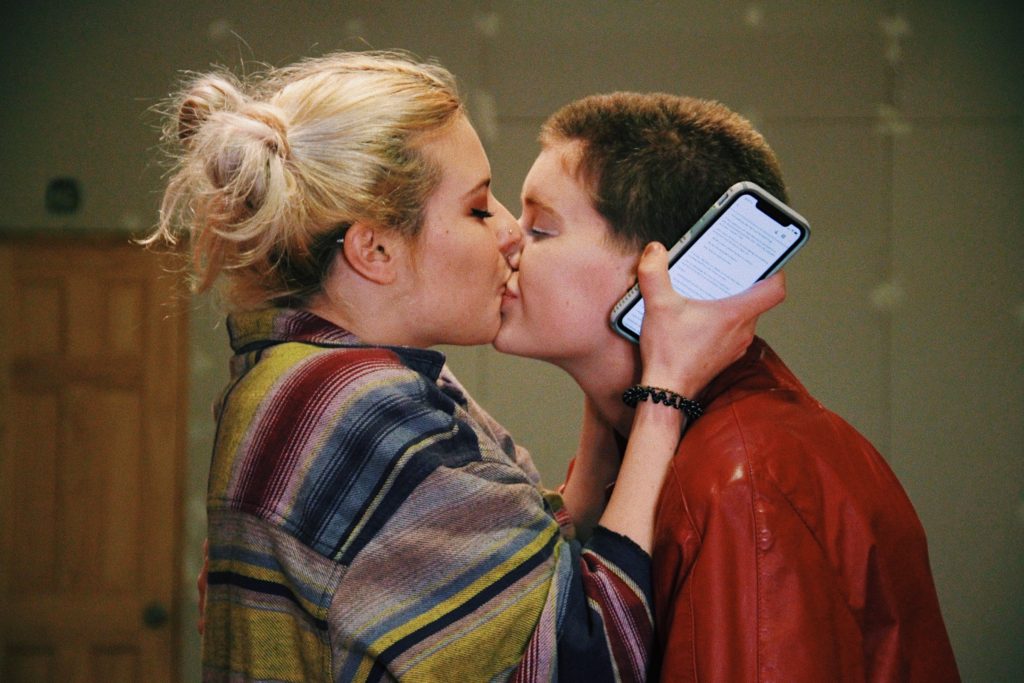 They are a group that does it all, including sending powerful messages throughout their shows and educating the audience on gender-inclusive language, art and gender sensitivities.  They color outside the lines and push the Philadelphia community to look beyond cultural “normalcy” and expectations. Their message includes respecting all identities for both their artists and their audience members by bringing awareness to social change such as respecting pronouns of each individual. “You’ve got to put the work on you,” Plunkett-Clements suggests regarding situations where pronouns are misused. “Respect the person, fix it and move on.”

The members of the Hum’n’Bards have a tremendous appreciation for their audience and make a conscious efforts to consider how their work may affect their community. Certain shows they produce may present powerful or potential controversial topics and thought-provoking material.  They have a diverse range of age and gender who attend their shows and put a huge emphasis on the ability of consent.

“Consent is important to us and we want our audience to consent to our show.” To honor this, the troupe will include content warnings or trigger warnings along with director’s notes on all promotional material and programs for their events. The director’s note will explain why they are connected to the material being performed, and at times, help the audience to understand that on certain sensitive or discriminating content they are in fact in on the joke. These measures allow for people to exercise their free will to choose whether or not they will attend the show based on the warning description, especially if it relates to a traumatic experience a potential audience member might have personally faced.

“We like to be as specific as possible because we know some people are triggered by some things and not by other things. We try to put keywords so people know what to expect because people argue a lot with content warnings or trigger warnings that it takes the surprise out of it for the audience and I think that’s bulls***.  If you do not put trigger warnings in your show because you’re trying to surprise your audience, that only helps for the people it’s not going to hurt.”

Plunkett-Clements is an advocate for all artists and producers to move forward with including warnings. “Think about the audience who might get hurt from the work rather than those who are going to be surprised or educated from the work. Even if you include a warning, the audience will still be surprised or educated because you [as the artist] did a good job with the depiction.” 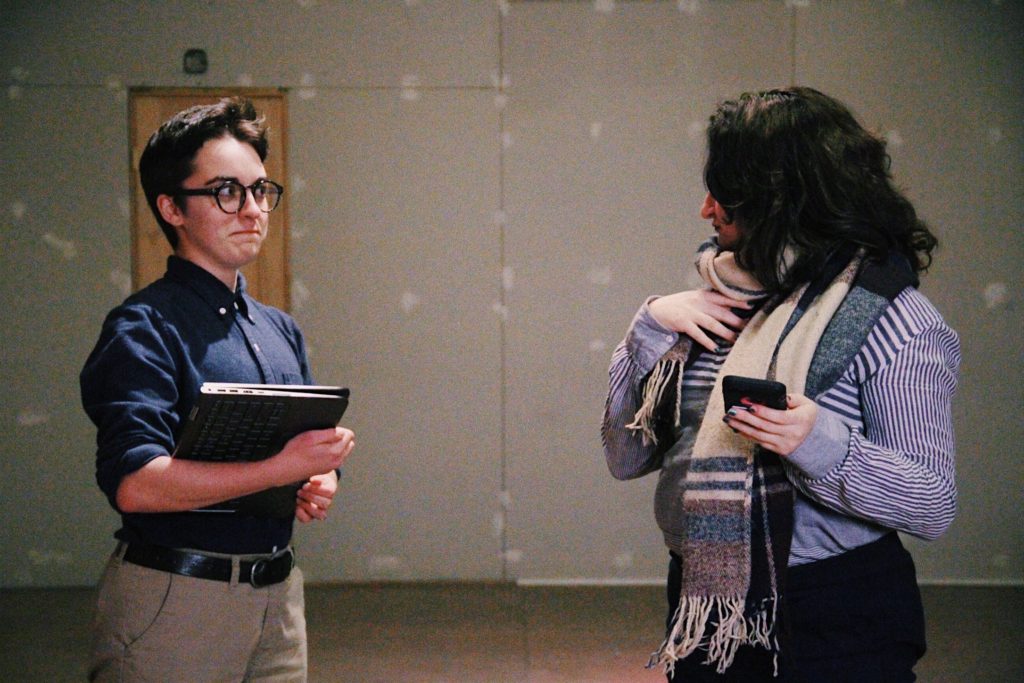 In February, they’ll be participating for a second time in Theater Week hosted by Theater Philadelphia. They will present a variety of shows, from February 4 through 17, all over Philadelphia at venues like L’etage and The Fire.

The Hum’n’Bards’ current show called We’ll Sleep When We’re Dead (February 4-16) is about a world where people don’t need sleep anymore. They question many perspectives including, Do technology and government mandate sleep schedules?  “The Hum’n’Bards definitely have an anti-capitalism stance. A lot of the themes that have been coming up in our discussions for We’ll Sleep When We’re Dead are discussions of class and how that affects our world,” says Plunkett-Clements, who describes their concepts as both beautiful and haunting.

The Hum’n’Bards provide a wonderful support system throughout the Philadelphia arts and queer community.  “Come work with us!” says Plunkett-Clements. “We won’t misgender you, we’ll make you feel good, strong and elevated. We want you to be your best self and make the art that you want to make.”  They also focus efforts on trying to pay the artists who work with them. Their site, humnbards.com, offers information on past shows, resources and funding opportunities by becoming a patron through Patreon, an ongoing crowdfunding platform, to support their work and artists.

Written By
Daniela Galdi
Published On
February 4, 2019
Share Through