On December 6, 2018, the poorest big city in the nation won a victory for the working poor. Philadelphia City Council passed Fair Workweek legislation 14-3. The bill, sponsored by Councilmember Helen Gym (At-Large), will guarantee advance notice of schedules, predictability pay, and a path to full-time hours for workers at large chain food service, retail and hospitality businesses. The law will ensure workers have the basic right to know when they’ll work and how much they’ll work.

“We can talk about poverty, or we can do something about it. We choose to do something,” said Gym. She continued, “This is a win for our city, for Philadelphia’s working people, and for smart business practices. This bill is a collaborative effort that advances a historic piece of anti-poverty legislation. It’s one of the most important municipal policies to end exploitative business practices like unstable schedules and involuntary part-time work that keep people in poverty.”

Over 600 People Came to Support the Bill

Alyssa Bradley, advocacy and communications associate for Coalition Against Hunger, came to support the bill in a packed City Hall. Bradley was able to get into the hearing after a few hours, but only on the balcony. Her name was culled from the testify list. Apparently, they had more than 90 people signed up to testify and so they just cut the list in half, but it was a treat just to be in the room, she said. She added that the energy in the room was incredible, “Philly never fails to remind me why it’s called The City of Brotherly Love, and that room on that day was just another prime example.”

Her reaction to the bill passing is that it’s an important step for Philadelphia. Coalition Against Hunger works to connect people to food resources and their mission is to build a movement to end hunger in every community. “But the bottom line is that we can’t address hunger without addressing the root cause of hunger: poverty. Irregular schedules and inconsistent work hours only perpetuate a cycle of poverty,” Bradley explained. “This bill makes it possible for working Philadelphians to plan for childcare, have the security of a steady and predictable paycheck, and have an overall better quality of life. Coalition Against Hunger is thrilled that Philadelphia City Council voted ‘yes’ on this bill and voted ‘yes’ to investing in a future where maybe Philly isn’t the poorest large city in the nation.”

“A Fair Workweek will change my life. Right now I only get my schedule with 48 hours notice. Occupancy at my hotel has gone up, but I made $5,000 less in 2017 than I did in 2016 because of reduced hours,” said Lekesha Wheelings, a Marriott hotel worker, speaking about why the advance notice of scheduling and access to full-time work matter so much for her family.

More than 130,000 Philadelphians work in the retail, food, and hospitality industries, where 80 percent lack a regular daytime work schedule, and 45 percent can’t predict their weekly income. 77 percent of Philadelphians in these sectors want more hours.

The Fair Workweek campaign was driven by a coalition––ranging from labor unions, economists, and Democratic Socialists to front-line workers and faith and civic leaders––who joined forces to advance Philadelphia’s most significant worker protections since Paid Sick Days. 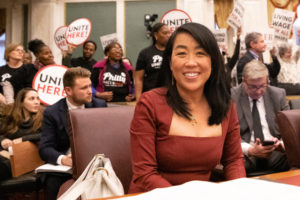 “This victory signals Philadelphia’s place at the forefront of a national movement to reinvigorate labor rights for the 21st century. It comes on the heels of the devastating anti-union Janus decision, and in a state where the minimum wage hasn’t been raised in nearly 10 years,” Gym said. “Philadelphia is proof that even, or especially, because of these failures at our national and state level, cities can be the model for progress and prosperity for all people.”

Workers will be guaranteed nine hours rest between consecutive shifts and $40 if they consent to working without adequate rest.

The law goes into effect on January 1, 2020 and will be signed into law by Mayor James Kenney.

Written By
Erin Jay
Published On
January 7, 2019
Share Through