How a German Christmas Market Tradition Came to Philly

Although Christmas markets have been a longtime holiday tradition across Europe (some dating back to the early 1300s and originating in Germany), at Dilworth Park and Love Park, Philadelphia got an especially authentic rendition in the form of the Christmas Village, and the Made in Philadelphia Holiday Market, which were curated and built by a team of Germans who now live and work in Philly seasonally. We spoke to Tobi Fischer, who handles public relations and social media management for the two venues, to get to know more about how the Philly markets came together.

How long have you been working with the two markets?

Where are you from?

From Germany, I’m from Munich.

You came to Philly specifically for this job?

How did you end up getting this job?

My boss’s boss is a professor in Germany full-time and he put the job description on our job board at the university and that’s how I found it. A lot of people only do it for one season because it’s just seasonal, but somehow it worked out for me and I’m still here.

What do you do when the markets aren’t in season?

I usually go back to Germany in late January or maybe February for other seasonal event projects.

Which part of Philly do you live in? 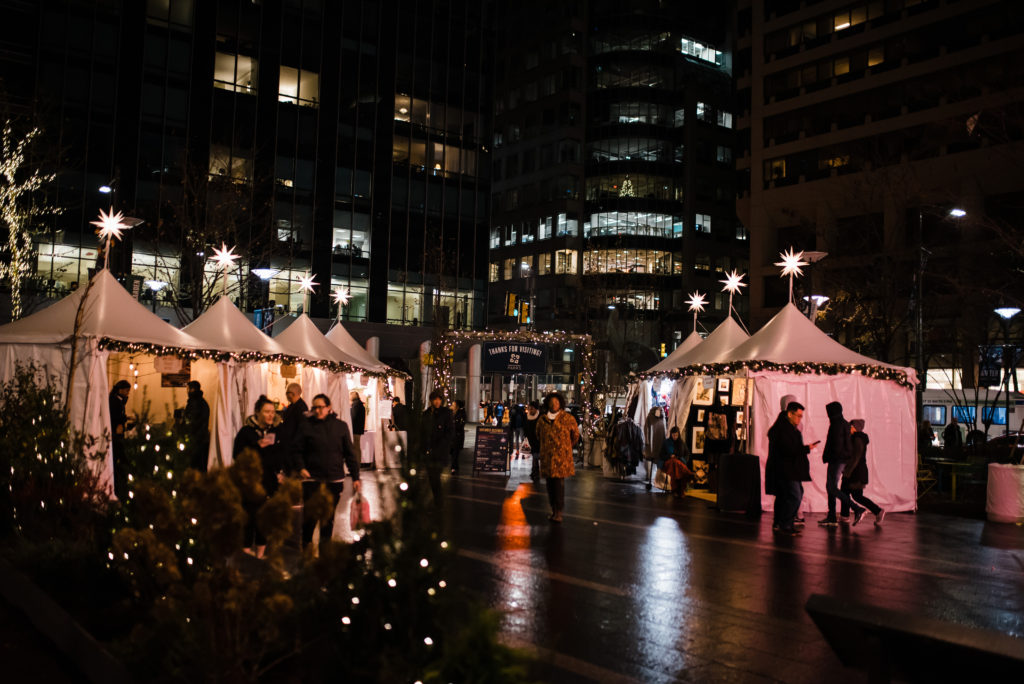 What’re the logistics of setting up the market and selecting the vendors?

We usually start in August, but the bookings for the vendors start earlier. We try to bring back the favorites that people really like or the people that have been with us since the first year. You get close to the vendors because you see them everyday for 30 days, it’s like a big family somehow. But we also want to add new vendors to give them a chance to show their products and to bring something new for the guests.

The vendors pay for their tent, we decorate the outside with the stars and garlands. For Made in Philly in Dilworth Park, we added 10 new vendors since there was more room. We worked together with Center City District, they do the ice rink and the winter garden. We asked to add more vendors because that way it looks like there’s more going on and more to do. We also added the courtyard section last year. It’s great to have one central point to go to in the city where all of the holiday happenings are taking place.

What about the programming?

At the Made in Philly market, we have crafting demonstrations since the vendors are local makers and hand-crafters. They do demonstrations during the week and guests can watch glass-blowing for example. Down in Love Park where the Christmas Village is, that’s where we have our international vendors, we have people from all over the world like Nepal, Ukraine, Egypt, Germany. So you can purchase gifts from all over the world. The Christmas Village is in its eleventh year and the Made in Philly market is in its fourth year. The Christmas Village started with 30-40 vendors and it’s been growing every year.

Why was it important to have a German team working on this project?

It’s a big tradition in Germany, like you grow up going to Christmas markets with your family or your friends and it’s like hangout place. When I’m in Germany, I go there like multiple times because it’s just what I’m used to. You go there for shopping, but also just to grab a drink with a friend, like mulled wine. It’s really common across Europe, and here it’s not that big and that’s why we wanted to bring it here. 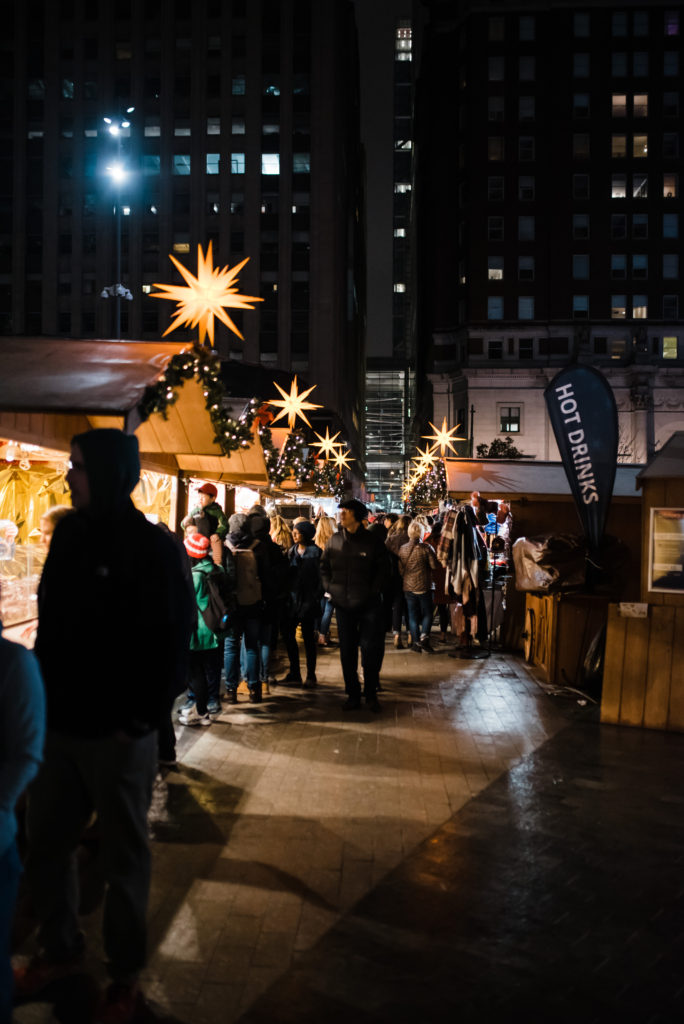 What were some things that you had to have to make it as authentic as possible?

Definitely the wooden huts, that’s super German and super traditional Christmas market-style, also the stars that are on top of the tents and the wooden huts are made by a German company called Herrnhut, and everyone in Germany has one of these stars. The vendors have products that you can find in Europe since some of them are from Europe, that makes it really authentic and the fact that we are a team of German people putting on the market.

We built wooden counters and wooden signs and painted them. We usually open the weekend before Thanksgiving and then we start setting up in the first week of November. It takes about two weeks until everything is ready. The huts for example, they don’t come in one piece, they come in five to six pieces and then we put them together. It’s more than 80 huts down in Love Park. In summer there is around four or five of us doing the planning when we start setting up, right now we’re around 15 people. We have a team for Dilworth and a team for Love Park. We go back and forth just making sure that everything is going well, that the vendors are happy, that the electricity is working.

What were some challenges that you encountered last year that you improved upon this year?

Last year was a bit of a struggle because Love Park wasn’t really done yet, so it was tight in terms of space and we weren’t able to bring a lot of decor and we didn’t have space for a seating area. We definitely wanted to improve that this year so we were happy to add a beer garden. So we wanted to make it look like a German beer garden, super, super traditional, not crazy blinky, just a beer table and beer benches, some garlands and wreaths. I think it’s really cool because then people have a place to go and have their drinks and food, and that was really missing last year. 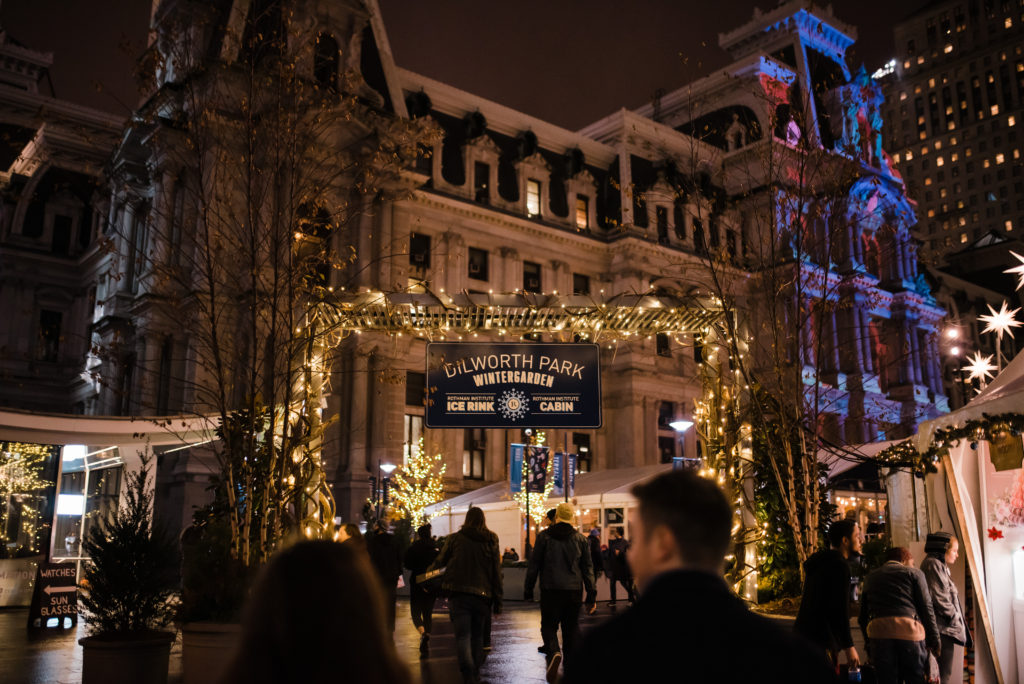 What can people look forward to this year?

At the international market in Christmas Village there will be beer sales, by Brewery Techne, which is a first for us. We’ll also have German-American weekend where we have German dance groups.

What do you like best about being part of this project?

I really like the fact that people know it by now and love to come back and tell us that they’ve made it a tradition. That’s really cool to us, because it’s our tradition and now people from here say that, “Oh I’ve made it a tradition with my mom to come here every year.” I think it’s a cool experience to try different foods, to try European food, and to find unique gifts that you wouldn’t find in the mall. There’s so much going on, from the ice rink to the two markets, and we’re happy to be part of it.

The Made in Philadelphia Holiday Market runs until January 1, 2019 with 50 vendors selling decorations, gifts and holiday foods. Admission to the market is free. Rides on the Carousel inside City Hall’s courtyard are $3.00 each. Follow @philaholidays on Instagram, and visit www.madeinphila.com for more information.

The Christmas Village will be open daily until Christmas eve. The market hosts vendors from around the world and features exclusive wine tasting events hosted by Chaddsford Winery and beer tastings with Brewery Techne. A beer garden called The Alm will also be open for guests to enjoy their food and beverages. Admission is always free, with food, drink and shopping pay as you go. Spread some holiday cheer by following @philachristmas on Instagram. Visit www.philachristmas.com  for more info.

Written By
Swabreen Bakr
Published On
December 12, 2018
Share Through