The “American Dream,” is often the conclusion to a story, a happy ending where success is found in the land of milk and honey. It is often the ending many immigrants hope to achieve, but the beginning of the story isn’t always happy, and the road to the end is long. Somaly Osteen’s “American Dream” is to help others like her find theirs.

Osteen immigrated from Cambodia and aims to help her fellow immigrants here in the US. She was born exactly 10 years after the Khmer Rouge left a devastating mark on Cambodia. While the country was recovering, her parents were determined to do their best and put her through school. She graduated in 2009 and went on to college where she studied Hotel and Tourism Management. “I was going to be a tour guide or flight attendant, or working in a nice hotel. After graduation, I got to work at a high class hotel, but the job only last for one month. I didn’t feel that I belonged there nor [did] I have a passion to continue to do it,” she explains.

One thing she was passionate about was serving others and making an impact in the community, and so she set out to do just that. While still living in Cambodia, Osteen started out as an outreach worker, helping raise awareness about HIV and STDs, later she worked as an advocate for Children’s Rights. The decision to continue down this path took her away from her community, country and her family. In 2015, after marrying her husband, she moved to the United States.

“I felt that this new land is too big for me and I did not dare to dream big. I didn’t know where to start and I felt useless. Frankly, I thought my knowledge; experience and skills that I gained in Cambodia will put me in a box. On the other hand, going through culture shock, lack of language proficiency and adjusting to a new lifestyle added doubt to my ability, although I never gave up. While I was waiting for my green card, to be able to drive and apply for a job, I would do anything I could to prepare myself for the next journey.”

Osteen now works as a Community Development Specialist, for the nonprofit organization SEAMAAC. “What I love the most about my current role at SEAMAAC is to see the positive change happening in a community where trust was broken and people were divided,” she says. 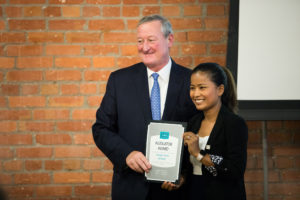 Osteen’s work helping others got her noticed by the Community Design Collaborative’s Store Front Challenge, where she won the Instigator Award. The Storefront Challenge is a citywide contest aimed at recognizing design excellence in storefront façade improvements. “I had no idea that I was nominated or even won the Storefront Challenge Award. It was funny actually, Robin Kohles, from the Community Design Collaborative who organized this event, didn’t mention that I won the award, perhaps it supposed to be a surprise. I sent her an email to invite her to come to a SEAMAAC fundraising event that was actually taking place on the same day. She replied, Somaly your fundraiser is happening at the same time and date as our Storefront Challenge Celebration, and you also won an award,” Osteen recalls.

The accolades don’t stop there, Osteen is also nominated (along with Andy Toy) for the 2019 Philadelphia Innovators Awards in the Social Mobility Intermediary category, for the SoPhiE Food Truck project, which aims to bring cross-cultural understanding through food. “I heard about the nomination a week or two ago. I think what we are doing is unique in Philadelphia and I’m happy to share some of what we’re learning with others,” she says humbly.

The SoPhiE Food Truck’s name  (SoPhiE stands for South Philly East) came about to represent the South Philly East community specifically around Mifflin Square Park and the South 7th Street Commercial Corridor. The food truck made its debut on April 21 of this year, and has showcased Burmese, Indonesian, Mexican, and Algerian cuisines.  “A term ‘Breaking Bread, Breaking Barrier,’ is very popular and most people know what it means. Food brings people together whether you agree or not. People coming together are a first step to getting to know each other and sharing their stories will allow people to learn new perspectives and look at others differently.”

Osteen’s “American Dream” isn’t the end to her story, it is simply another chapter, in a much larger story. A story to continue to service the people of Philadelphia, “I love the strength of the diversity that Philly and the community that I’m serving has to offer. I hope to continue to get better in what I’m doing, and to bring a positive change to the community and the city that I’m serving. I hope to see all immigrants and refugees stand and continue to get involved in their own community for a better development. Actions speak louder than words.”

Written By
Yali Perez
Published On
November 14, 2018
Share Through