If Philly had a crystal ball, what would it show? At this year’s DesignPhiladelphia, the Friday night crowd at the Center for Architecture + Design got 10 quick (like, under-seven-minutes quick) takes on what’s next for the city.

At Fast Forward >> Philly 2018, hosted by Philadelphia Emerging Architects, some ideas are ready for launch and some seem less than likely, but it was an entertaining night. Here are some highlights.

First up, Kimberlee Douglass and Dr. Drew Harris pitched their “Parks in a Truck” concept, or, as Douglass specified, “parks that come in a truck.”

Douglass, who has her master’s in landscape architecture from Penn and is now a full-time faculty member at Philadelphia University, focuses her research on how kids are affected by contact with nature. Harris is an assistant professor at Thomas Jefferson University College of Population Health, among other leadership roles in the field. He’s all about helping healthcare providers integrate “social determinants of health” and the built environment into a holistic picture for patients. 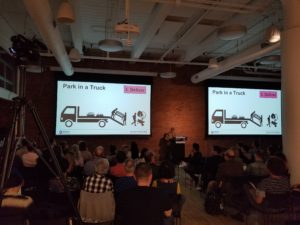 In Philly, Harris noted, life expectancy can vary by as much as 20 years simply based on your Zip code, making your neighborhood a more important determiner of your longevity than your genes. Access to green space is a big factor here: it’s associated with decreased incidence of things like depression, gun violence, and heart disease. He and Douglass want to turn some of Philly’s 40,000 vacant lots in “40,000 opportunities.”

Douglass quickly explained their plan for grassroots community engagement to plan new parks, not from the outside in, but through locals’ involvement. This would include neighbors picking ready-made components like outdoor game sets, climbing blocks, birdhouses, and furniture to install together out of a single truck delivery, “like a barn raising,” with paid “park ambassadors” from the neighborhood maintaining the spaces. Douglass and Harris alluded to teaming with local foundations for support, as well as partnering with the Philadelphia Water Department.

Heather Harrill, with an initiative titled Seeding Enterprise: Regenerative Redevelopment, has a pretty radical proposal for the notorious wasteland known as Logan Triangle, with its troubled history of failed residential development and surrounding poverty. Houses on the 800 block of West Roosevelt Boulevard were literally sinking into the earth before they were razed in 1986, and the entire 35-acre site was left to rot. Harrill said her proposal isn’t like anything we’ve ever seen or built before, “so maybe that’s why we should do it.”

She’s the founder and principal architect of Ginkgo Vernacular, which specializes in “regenerative community design and ecological architecture.” 34 acres of Logan Triangle are standing vacant today, and since the site’s faulty foundations rule out a lot of traditional architecture, she proposed an ambitious community anchored in food, wellness, and sustainability. That could include raised garden beds, plant nurseries, greenhouses, a permaculture forest, a cannery, a market for garden produce, a preventive wellness clinic, and even self-sufficient moveable tiny houses that could sit safely on the Logan Triangle surface. She outlined a quick vision for organic waste, renewable power, and water systems. She called it a “socio-ecological solution,” or, as she prefers, a “logical solution.”

Other proposals also focused on green space, like Bailie Gregory and Sara Jade Underwood’s Mercy-Emily Edible Park (MEEP). The existing site at 525 Mercury Street in South Philly (actually several plots with different owners) got its start thanks to Occupy protesters camped out there, who planted trees and fruit. MEEP has taken root from there and now has a “full-functioning garden infrastructure” and many community stewards, and leaders need to find a way to secure ownership of the lots to move forward with a vibrant space that, according to Underwood, affects “what you put into your body and you put around your body.”

Marcus Brandt declared his passion for creating a “Philadelphia Preservation Shipyard” near the existing Pier 68 for restoration of historic tall ships like Philly’s Gazela, in the spirt of remembering that Philly is here in the first place because of its location as a port city. He wants to repurpose tons of high-quality stone from the city’s early years which was simply chucked into the river, where it lies today. He also wants to restore the last remaining church bells from Colonial Philadelphia, in the spire at Christ Church, so they can ring for the 250th anniversary of the Declaration of Independence.

Barendt’s plan includes a sustainably-powered structure whose rendering looks kind of like a spaceship combined with a wooden open-air cathedral. The grounds would include a pool, skate parks, rain gardens, an amphitheater, a digital library, and transit entrances. Whether the massive bulldozing that made way for the Benjamin Franklin Parkway 100 years ago (which Barendt seemed to indicate as a model for large-scale urban transformation) is a positive precedent is something local urbanites would certainly debate—along with Barendt’s hope that the center would be a place to “overcome diversity and learn to work together.” Honoring diversity, not “overcoming” it, might be a better theme.

Will Herzog, the executive chair of the SEPTA Youth Advisory Council, promoted his vision for better integrating Philly students into city life (and keeping them here after graduation) by overhauling SEPTA’s current student rider system with a plan that would include transit access built into students’ existing tuition fees.

A stand-out concept from Shannon Pitt and Sam Kuntz, #ISeeALegacy, sounds like something Philly needs right now (remember the loss of Little Pete’s?). Pitts is a steering committee member of the Young Friends of the Preservation Alliance (YFPA), a young volunteers’ branch of the Preservation Alliance of Greater Philadelphia. Kuntz is YFPA’s co-chair.

They argued that “preservation” isn’t only about saving buildings at risk. Other cities have modeled programs to target and preserve legacy businesses (defined as locally based businesses more than 30 years old, with tangible community impact), which Kuntz called “anchors in rapidly changing cities.” Their plan would inventory Philly’s legacy businesses and promote concrete action to protect them, including standardized mechanisms for monetary support where needed and compiling information for longtime and prospective patrons in one place.

It’s impossible to say what the future holds for Philly, but at least there’s no shortage of ideas. If this piques your interest, you can check out the full stream of the event here.

Written By
Alaina Johns
Published On
October 16, 2018
Share Through