The Beautiful Alternative: Orchards in Our City

The Philadelphia Orchard Project (POP) was founded in 2007 to answer the question: How can more Philadelphians access fresh fruit? 10 years in, POP has planted 59 orchards, “each one in partnership with a community group, school, church, or nonprofit,” Executive Director Phil Forsyth clarifies.

Phil has been with POP from the beginning. He moved to Philly in 2006, the same time Paul Glover, soon-to-be founder of the POP, was hosting meetings in his living room to talk city orchards for economic justice. “I got a flier and went to the first meeting. Turns out, I was the only one in the room who had a background in planting, so I became the one designing orchards.” Phil was one of the original board members and was hired as the first staff person in 2008 (and remained the only staff member for six years). “POP is my dream organization,” he says. “I always wanted to find a way to use my background in Landscape Design to benefit broader communities. Traditionally, it’s a luxury service, but now, with POP, I can help people grow as much food as they can.”

I had the chance to talk with the small but mighty POP team as they prepared for Spring in the city. March was a hectic month; POP was still finishing winter pruning, on top of hosting events and workdays. It was also their biggest month for education.

Every Thursday in March the team hosted POPCore, an educational series intended for community partners, and also Orchard Liaisons. Liaisons are knowledgeable volunteers who act as satellites between groups. Without specific affiliations, they can show up where needed to help orchards around the city grow. Anyone can sign up to become an Orchard Liaison, and there’s real demand for volunteers during warm months. “This is how we can have 59 sites and only four staff,” Phil says. 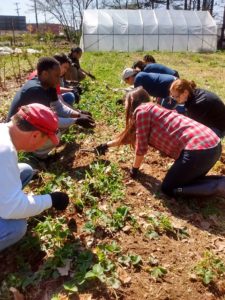 “I remember when I was volunteering,” says Tanya Grinblat, Director of Development, “I thought the organization was a huge Philadelphia institution. When I found out it was just Phil and Robyn [former Orchard Director], I was so surprised, because they seemed to be everywhere.”

Michael Muehlbauer and POP had the common aim to support food sovereignty across the city, and now Michael is the new POP Orchard Director. His background is in planting “food forests”—places that mimic woodland ecosystems, but substitute oak and fern with edible plants. Traditional forests cover acres of space, but even a well-planted community garden can be a food forest. In contrast, a “food desert” is a site of apartheid; systemic racism bars access to fresh fruit and vegetables in Black and Brown neighborhoods.

The USDA estimates an astounding 23.5 million people live in food apartheid, so we need creative approaches like city orchards to revitalize and heal our food system.

Traditionally, an orchard is planted as rows of trees, maybe on a hill, definitely not in the city. The food forest approach encourages more dynamic planting. “Trees, perennials, vines, berries, herbs, all grow and work together as a single ecosystem,” says Phil. “We’re working together with plants, soil life and pollinators for more productive, and also more ecologically sound spaces.”

“We also sow some native plants,” Tanya adds. “Like paw paws—” (here the team mmm’ed in unison) “—a custardy, mango-like fruit. Because they are native, they grow most easily here.”

This is an opportunity for neighbors to learn about nature, and to help rematriate a more balanced, Lenape environment. “My favorite part of working for POP is learning about all these fruits I never knew existed—like paw paws! And kiwi berries!” (Kiwi berries are vining fruits that look like mini kiwis.)

“The Food Forest style of planting creates places of refuge,” beams Alyssa Schimmel, POP Education Director. “For the pollinators, and for people: It requires you to slow down, take your time. You can explore what’s planting, how it’s doing, and how things are relating to each other. Green spaces in cities can feel limited, and this offers such a beautiful alternative.” 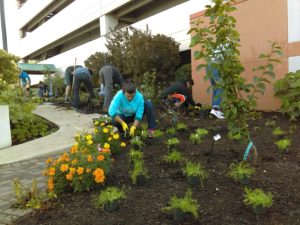 Alyssa also got started with POP as a volunteer. She found herself drawn to the wonder and excitement of neighbors when they start taking care of new plants. Gardeners and tree-keepers can purchase her new Pest and Disease Scouting Guide or Orchard Care Guide as a way to support POP. These guides help identify challenges and suggest best practices. “There’s a search function, blog and resource library on our website for growers to find information,” Michael describes, “but having a tool in your hand is important. We want folks to feel empowered.”

Looking forward to frolicking and eating well this summer? Most orchards are publically accessible, and have harvest events throughout the season. You can learn more about POP festivals, publications, and workshops at www.phillyorchards.org.

Written By
Ailbhe Pascal
Published On
July 10, 2018
Share Through