Plenty of us wish we could get in on green energy, but if you can’t afford to buy and install your own solar grid or build a house with cutting-edge eco-friendly features, you’re out of luck. Right?

Nope, says Philadelphia Energy Co-op executive director Damali Rhett. It doesn’t matter if you’re wealthy, low-income, a renter, a homeowner, living in shared housing or a group home, or on PECO’s Low-Income Home Energy Assistance Program (LIHEAP): “If you have a PECO bill in your name, you have the ability to support renewable power … and do it in a way that you support a non-profit community-based organization.”

That would be the Philadelphia Energy Co-op, founded in 1979 by a group of Weavers Way grocery co-op members who decided to apply a cooperative buying and ownership model to heating oil. Now operating out of Center City and serving a membership base of just over 5,300 people (and growing), the co-op offers electricity, heating oil, and natural gas.

In the case of heating oil members, for example, “instead of [individual] people negotiating directly with the heating oil company, we’re doing it on your behalf, so you have the power of several thousand people versus just you,” Rhett explains.

“What we do is we buy on your behalf and we charge a small margin,” she continues, emphasizing that financial and operational transparency is their top concern. “I do my pricing to break even and then have a small return at the end of the year. We’re not looking to meet an artificial target.”

The co-op has annual member meetings to present its financials and operations. Board members are on hand to personally answer member questions. “You get a chance to engage with your energy company in a way that you otherwise wouldn’t be able to.”

And if you call or e-mail the office, no phone trees. “We offer highly personalized service. You’ll definitely get one of the staff.” That means quick answers to any questions about your energy service or bill.

The co-op has always had a sustainable energy focus, Rhett says, and it’s been offering delivery of electric power since the early 2000s, from a mix of sources. Currently, that’s about 99 percent wind-generated and the rest solar. And because of members who wanted to support a more localized green economy, the co-op now offers an electric power option that is 100 percent Pennsylvania-based.

“What’s cool is understanding that you’re part of this larger value chain, and you’re really supporting the development of renewables across the world,” Rhett adds. “The prices are dropping, so it really is coming on par with more traditional sources [of power].” 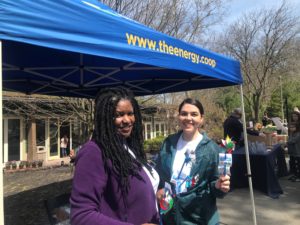 And as of three years ago, Energy Co-op membership is more accessible than ever, regardless of income: “We actually don’t have member dues,” Rhett shares. “We know that green energy is still kind of a premium product, and we want to democratize that as much as possible.”

Rhett doesn’t see herself as an energy executive: rather, she’s an educator and a problem-solver. She loves giving presentation to all kinds of people (especially seniors) about how electricity is generated and distributed. Ultimately, whether or not people opt for renewable energy or join the co-op, the thing she hopes they realize is that they have a choice—something many people in Philly don’t realize. That choice “can be the default of PECO, but it doesn’t have to be.”

There are other renewable energy companies on the scene, but Rhett points out that they sometimes employ aggressive or confusing door-to-door tactics to enroll new clients, who may not understand that their new power source is not PECO, or even become the target of scams when they release their account numbers.

What’s on the horizon for the Philadelphia Energy Co-op? More partnerships, Rhett says—not just in the environmental space, but also in the realm of community-based organizations. That would mean extending their resources not only as an energy supplier, but as an educator on energy in Philadelphia and the surrounding counties of their service area. Rhett wants to help get the word out on local energy news, such as City Council’s recent vote to advance a bill that would eliminate dedicated parking for electric vehicles.

“We want to be a place where you can understand what’s happening in the industry: locally, state, and nationally.”

To learn more about becoming a member of the co-op, visit online.

Written By
Alaina Johns
Published On
June 11, 2018
Share Through