In 1959, an anonymous donor left a townhouse to a group of artists for a single dollar. The artists took that townhouse and made it into a new gallery space, relocating their artist membership group to a tight-knit neighborhood in South Philadelphia.

The gallery, Da Vinci Art Alliance (DVAA), is still in that same neighborhood, in that same townhouse, hosting group exhibitions as an artist membership space. But both the space and the member base have seen changes since the early days. 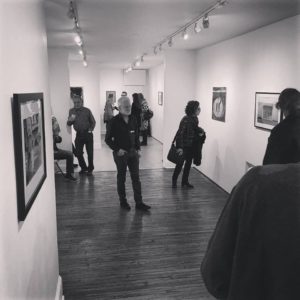 Originally established in 1931 by fashion photographer Severo Antonelli, the gallery served as a haven for Italian-American artisan immigrants who could not find other venues receptive to showing their work. Over time, artist membership expanded to include women, and ultimately, everyone.

Yet the regularly rotating shows still leave room for DVAA, its curators, and its artists to explore the original mission: giving artists an opportunity to show their work in an embracive setting, and providing a receptive community for art and the complex subjects it can convey.

In keeping with those origins, the gallery has seen a number of exhibitions that question viewers’ and artists’ perceptions of immigration over the course of its 87 year history. This May, from the 16th to the 30th, DVAA will once again be bringing this topic to the forefront with Where I Dwell; Memory, Place, and Home. Eight artists from around the globe will be sharing their experiences and impressions of home as a physical and emotional space.

These experiences will be drawn from many places – Iran, China, Columbia, and Italy, among others – but ultimately the artists share a sense of identity and home with Philadelphia and the surrounding region. Their memories are painted, photographed, filmed, and even performed, as each artist has pulled from the unique artistic traditions of their places of birth, places of family heritage, and places lived in and studied at over the courses of eight well-traveled lives. The gallery serves as a fitting space to explore these questions thanks to its several lives, first as a literal home to its original donor, and later as a home for subsequent generations of artists searching for a space to show their work.

For one of the artists in particular, Amy Oh, home is simultaneously simple and bursting with meaning. The terms memory, place, and home can be very simple for some people to answer, but for some others it is one of the most complex questions we can answer,” Oh says. “Simple ice-breaker questions such as, ‘Where are you from?’ often leads me into thinking, ‘Does this person mean where I was born? Or is this person asking where I am from in terms of ethnicity? Or maybe where I lived the longest? Or perhaps where I lived last?’ and it goes on. In this sense, my work reflects this complexity and responds to the weight in which some of these ‘simple questions’ are not so simple in many cases.”

The themes of the works themselves vary in complexity and emotional resonance. Maggie Lee, a Chinese-born Philadelphian, uses photography to confront the unstoppable force of time. Her most recent photo captures invite viewers to join her on her recent trip to China, where she attempted to reconnect with familial traditions that felt fragmented in a childhood rooted in the clashing belief systems of her agnostic parents and Catholic school.

Jordi Sabaté places home within spheres political, digital, and fictional. Originally from Catalonia, the work on display in Where I Dwell will have a palpable connection to the current political climate there. Just as current residents of his hometown fight for democratic independence, the fictional figures in Jordi’s works fight for freedom of identity. The figures are directly inspired by those Catalonians who have faced social media ridicule for fighting for their cause in a public, digital space. The figures as such stand for home as defined by what a people can make it.

“My last trip to Catalonia, at the end of last year, was in the middle of this political tension,” Sabate recalls. “That is my last physical and emotional memory of my homeland. I wish I could represent my work during better times… so that I could show the beauty of Catalonia. However, the events of the past few months have inspired me to represent the voices of my people.”

Programming throughout the show’s run will give the audience a chance to participate in the memory-making and storytelling of home. Opening night brings in performance artist Salome Cosmique, who will sweep through the room in a white gown. She will ask guests to write their comments on the show on her dress, as she in turn responds to the show by writing on her body. Salome is renowned for her confrontation on issues surrounding identity, gender, and immigration through her performance pieces.

The opening will also draw in a number of representatives from the Bella Vista neighborhood, as DVAA intends to expand its concept of home out into the local community. Among the night’s participants will be Christina Briglia, a Realtor with Coldwell Banker Preferred, Tony Bomis, VP of Mortgage Lending at Guaranteed Rate Affinity, and the Bella Vista Neighbors Association.

Other programming will include a panel on the topic of art from the immigrant’s point of view, being organized by Erika Guadalupe Nuñez, a local artist and community organizer, date to come, and a closing reception from 6-8 pm.

“We want to be part of the neighborhood. We want people to feel comfortable and come in and see us and come in whenever they want, because people are intimidated by an art gallery,” explains Linda Dubin Garfield, President of the Board at DVAA, about the hodgepodge of programming hosts. She hopes to use the event to reintroduce DVAA as a welcoming space to the public-at-large, a space where people can not only see art, but fall in love with it and potentially bring it into their own homes.

As it stands, the gallery can already take credit for a pretty powerful presence in the community, as evidenced by a recent renovation effort fueled primarily by volunteers. According to Linda, about 40 people showed up in response to their call for help, and spent hundreds of hours improving the lighting and opening up the first and second floors to even more exhibition space, leaving an even bigger home for even more artists.

Written By
Erica J. Minutella
Published On
May 9, 2018
Share Through