In the late 1970s, the first, over-the-counter, home pregnancy tests were introduced into the American market. Now, nearly 40 years later, Lia Diagnostics is about to launch a new generation of flushable tests, made of biodegradable paper, not plastic.

Housed at the University City Science Center’s Digital Health Accelerator, Lia passed a significant hurdle late last year, achieving FDA pre-market clearance. A company spokeswoman says its pregnancy test is expected to begin online sales in the U.S. in the middle of the year and in Europe in early 2019.

The idea and early research for a discreet, sanitary and environmentally friendly pregnancy test began at the University of Pennsylvania’s Masters of Integrated Product Design, says CEO Bethany Edwards, who co-founded the company in 2015 with several classmates. 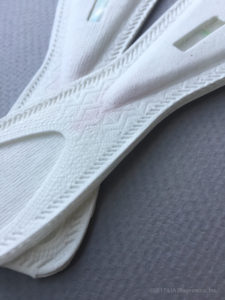 The market need was clear for a product that hadn’t seen innovation in decades, she adds. “We spoke with lots of women. And we listened, without judgment, to their stories and experiences. Everything from hiding pregnancy tests in the trash, to taking them in public or office restrooms, to the slew of plastic tests cluttering their bathroom trash cans reminding them of their struggle to conceive. Emotion ranging from disappointment to fear to shame to joy.”

Lia works the same as plastic, over-the-counter pregnancy tests by looking for the presence of hCG – Human Chorionic Gonadotropin – in urine and promises a plus-99 percent accuracy rate. The innovation is in the use of biodegradable paper, which is flushable or compostable.

“We knew it was important for the solution to not only be good for women, but good for the planet, too,” says Edwards.

Lia joined the Science Center’s Digital Health Accelerator in October, to take advantage of benefits including access to lab space and a network of experts and decision makers to provide support and advice, says the spokeswoman. As it prepares to manufacture and commercialize the test, the company is adding staff and beginning preliminary funding talks, she adds.

To get to this point, Edwards and her team have expertly worked Philadelphia’s entrepreneurial ecosystem, from winning Temple University’s Innovative Idea Competition, to acceptance in DreamIt Ventures, to investments from Ben Franklin Technology Partners of Southeastern Pennsylvania.

And Lia continues to rack up titles, accolades and awards. In December, the company won the TechCrunch Startup Battlefield at Disrupt Berlin 2017,  winning €42,000 and the coveted Disrupt Cup. In late January, Edwards won a grand prize of $50,000 at the 2018 BlogHer Pitch Competition.

“Our long-term goal is to modernize and humanize the women’s reproductive health and wellness category with products that delight and deliver,” says Edwards. “By starting with the pregnancy test, we’re tackling this head on.”

This article was produced as part of our Writer in Residence Program with the University City Science Center.

Written By
Elise Vider
Published On
February 20, 2018
Share Through