Whether it’s an art show in a warehouse, a small performance at a coffee shop, or a gathering at a cocktail bar, this city always has something to surprise and inspire you. Philadelphia is a city full of hidden gems. I personally find myself often wandering in random corners of the city seeking out new and refreshing experiences, and Philly never lets me down. No matter what type of scene you are looking to be a part of, it exists in this city. You have to just be willing to venture outside of your comfort zone and search the city streets for what you have been yearning for.

Recently, I’ve been hearing buzz about this series of events happening around the city that are being organized by a collective known as GLBL VLLG. This organization was founded by Lyonzo Vargas, Miyekow, and Raph Jones.

Their company is dedicated to bringing people together through the power of music, wellness, and interactive events.

With the help of a highly organized team of talented individuals, their events are multimedia experiences that live on through video, photos, and original songs long after the show is over.

Urged on by my unrelenting curiosity, I decided to make my way to their VLLG JAM event which took place on a Thursday night at Sera Phi, an amazing event space and recording studio right off of Baltimore Ave. The sold out crowd, a colorful mixture of people ranging from art school kids to older jazz cats, filed into the venue promptly and everyone was instructed to sit on the floor in a circle. As the jam session kicked off, the host warmed up the audience by performing songs that involved lots of crowd participation. Soon the microphone was being passed around to the featured performers, as well as random individuals in the circle. The music transformed as each performer added their own ingredients to the pot and the enthusiasm of the crowd intensified the energy in the room. Throughout the night I felt this strong sense of community and a total lack of ego in the room.

I took some time to talk with Raph Jones about GLBL VLLG, their events, and their mission.

How would you describe GLBL VLLG and what do you guys do?

So, GLBL VLLG is the entertainment and wellness company.  One of our main events is what you see tonight, the GLBL VLLG jam session or we call it the VLLG Jam Session. And it’s literally a space where we invite musicians, artists, artrepreneurs, and just people who love music. We want them to come have a musical experience.

We invite them to one location and participate in an all improv jam session. We make music from scratch involving everyone. We pass around the mic, we asked who wants it, they can get on the mic and they can sing, they can rap, they can express to this music. Whatever the musicians come and play, that’s what we’re expressing to. So we might even throw out genres, it might be like funk music or whatever. The band will play a funk beat … all from scratch, nobody practiced, it’s like a classic jam session, but it’s so much more.

And, the idea with GLBL VLLG is coming from the perspective that we don’t want to go to the club, like there has to be something else, another great feeling event that people want to come to. It’s the only concert where you can participate in, where the artists and the audience is the headliner. 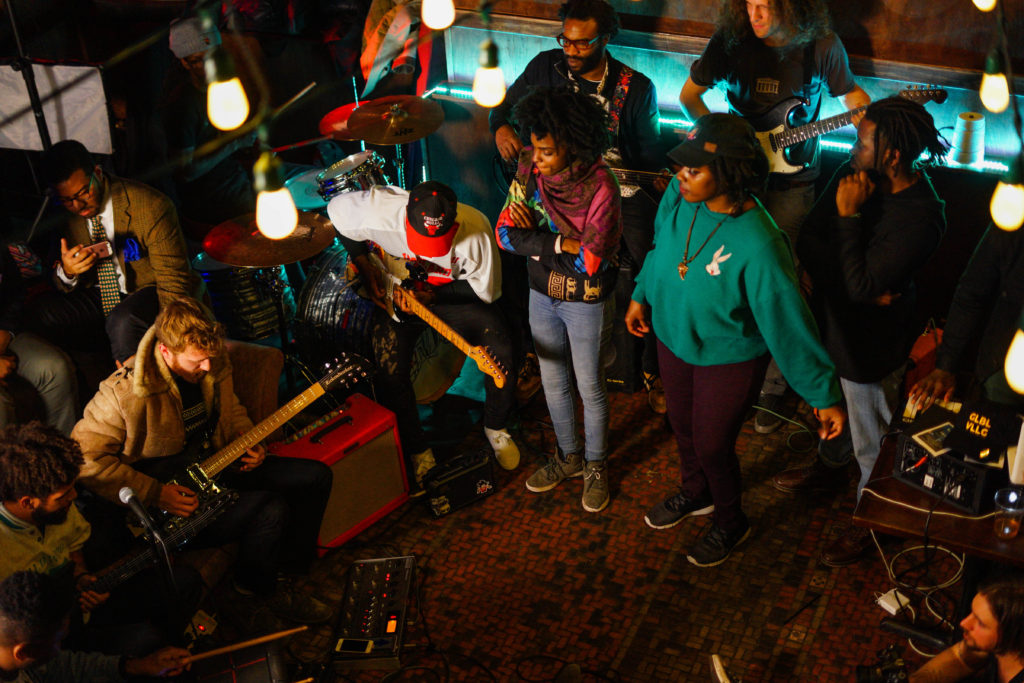 How long have you guys been doing this?

I would say we started in December 2016 and we celebrated one year this past December.

I noticed a lot of the events are in West Philly. Is there a reason for that?

Actually, it’s funny, we try to stay at one venue, but for some reason the universe didn’t want us to. We’ve been moving around the city. We started at REC Philly in a room doing jams like with not even 30 people, it was probably like 15, 10 people in the room and then we just built from there. And then we started packing out that room with 40 people, and then we had to move it to a coffee shop. So we did it at Win Win. We’ve done it at the Painted Bride on Vine Street. We’ve done it at Circle Thrift in South Philly. We’ve done it at many places all over the city.

I think it’s half and half, like from the beginning, West Philly has showed us love and this is where a lot of like artists are and a lot of soul is. It’s not just that, it’s also a lot of nice venues here.

Are all of you guys musicians?

In our own right. I’m more of a musician, like I play many instruments. And Lyonzo, he’s an artist, he’s a really good lyricist or [sic] what not. Miyekow, as well, he’s a singer songwriter, artist, lyricist, whatever you wanna call it, he does that too really well. So, we all come from that. And now we just want to create a nice experience for this crowd that hasn’t been represented like the free spirit community. We wanted to give them a space to express and participate in, you know, be a part of something that’s bigger than them, that’s spiritual and positive and holistic. We want to bring that lifestyle to people.

HAPPY JAM DAY! . “The only concert where the Audience is the Headliner!” . The Village is excited to see you tonight for the VLLG Jam Episode 26! Tonight will be an incredible night. It is an Open Jam Session. Come jam, sing, dance, paint or come chill, vibe, and enjoy! Everyone is welcomed. All are invited. Everyone gets a chance to participate. “We are the performance!” Much love🙌🏾 | Shot & Edited by @atom_the_guy and @mattzmac | 🗣@joiekathos #thisisthevillage #glblvllg

What is it about the other things going on in Philly that made you feel like the things you guys have created are necessary?

I think it’s not even just Philly, I think everywhere needs something different than the same thing. What we do is something positive and it’s something that feels good. It’s something that we need and I really feel like it’s kind of a step away from the real world. We go to work, we come home, and when you save up your money, you go buy a bottle on Friday and then drink away while you go to the club, so that’s cool and everything. Everybody needs that a little bit. But, what about the people who want the alternative? Like a lot of girls, they say, “I don’t want to go to the club. I don’t want to go to the bar. I don’t want to want to be around these people, like these guys touching on me,” or “Everybody’s looking at what I’m going to wear.” They don’t want to be judged on their appearance and all this other stuff. So, this is a place where people don’t. People don’t care what you have on, they just care about your energy. You wear whatever you want as long as your energy is good, you’re OK in this space.

What do you guys see this movement that you are creating turning into years from now?

The artists that you put on, is there anything behind that or is it just people you know? How does it work?

It kind of both of those things. We put out a flyer that asks who wants to be the spotlight artist. People send us a message saying they want to be. We only choose three. Sometimes it’s people we know, but we don’t like to pick and choose. We’re just like “first come, first served.”

Is there anything else you want to put out there?

Just please stay tuned to what we’ve got. Please come out and support. When you see us, say, “Peace,” and give handshakes and hugs. We love that! Give us feedback because we always want to know how we’re doing, you know what I’m saying, how we’re impacting people.

The next VLLG Jam will be February 22nd at Ruba Club (416 Green St, Philadelphia, PA).  To RSVP go to https://linktr.ee/glblvllg.

Written By
Lil Dave
Published On
February 13, 2018
Share Through